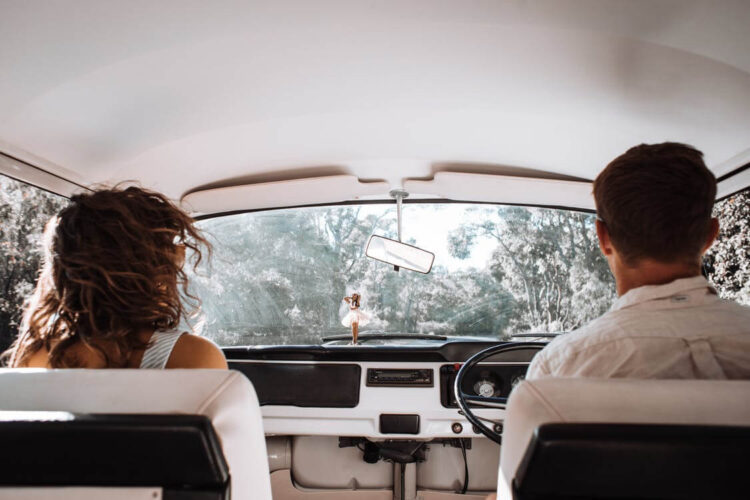 Rear-end collisions account for roughly 29% of all motor vehicle crashes and are responsible for thousands of fatalities and injuries each year.

Unlike many incidents, rear-end accidents don’t occur simply because two parties were in the wrong place at the wrong time. Typically, these accidents are the result of a shortcoming, mistake, or lapse in judgment made by one or more drivers.

Fortunately, there are many ways to reduce your risk of being involved in a rear-end collision. Here are 11 important tips to help you stay safe on the road!

It’s estimated that roughly 87% of all rear-end crashes involve a distracted driver. There are all sorts of distractions that you might not think twice about while driving—eating, texting, and fielding calls are among the most common.

Even a maneuver as simply as taking your eyes off the road or changing the radio station can limit your ability to react to another vehicle. While distractions are always going to exist, it’s important to build defensive driving habits that help you eliminate these distractions when you’re behind the wheel.

Speeding is a factor that is involved in many rear-end collisions. The faster you drive, the less time you have to react to a car who is braking ahead of you.

Rather than exceeding the speed limit at every opportunity, monitor your speed and drive conservatively. The extra time that a slower pace affords you could be the difference between getting involved in a rear-end collision and braking safely.

As a rule of thumb, you should always keep at least two seconds between you and the car in front of you. Some experts even recommend three seconds or one car’s length for every 10 miles per hour of speed.

There may also be times when you’re already traveling at a safe speed but a car behind you is encroaching on your space. In these situations, a reckless driver may be tempted to brake-check the other driver—an equally dangerous maneuver.

If you’re concerned about the lack of space the driver is leaving, it’s best to simply move into another lane in order to stop the driver from tailgating.

4. Adjust your driving for poor conditions

While the two-second rule is an important baseline, drivers also need to adjust for adverse conditions—whether it’s rain, snow, or fog. The reality is that even two or three seconds might not be enough time to bring your vehicle to a complete stop.

Use sound judgment. If you don’t feel that you would be able to brake safely in wet or hazy conditions, either reduce your speed or create even more distance between your own vehicle and the one in front of you.

There is a direct correlation between the use of alcohol or drugs and the likelihood of a rear-end collision, as these substances are known to reduce your reaction time, blur your vision, and cloud your judgment—attributes that are critical for safe braking.

Drugs and alcohol should never be used before getting behind the wheel, yet they are involved in approximately 16% of all motor vehicle crashes.

For the sake of others, eliminate any potential for you to drive while under the influence of drugs or alcohol. If you plan to have a drink, arrange for a designated driver or hand your keys to a responsible friend.

6. Make sure your brake lights are working

It can often be difficult for other drivers to gauge whether a vehicle is slowing down without the aid of brake lights.

Don’t wait to receive a ticket before replacing a faulty brake light. Make sure both lights are functional, clear, and vibrant so that there is no confusion as to whether you’re slowing down when your brakes are engaged.

7. Use your hazard lights if necessary

When you’re approaching an unexpected stop—whether it’s because of a traffic jam or an accident ahead—one of the best things you can do to alert other drivers is to engage your hazard lights.

This will indicate to other drivers that they need to slow down, increase their traveling distances, and prepare to come to a stop.

8. Look ahead of the vehicle in front of you

The more time you have to react to a situation, the better. Too many drivers speed up and slow down solely based on the behavior of the driver directly in front of them.

By looking ahead, you can better anticipate whether vehicles are simply reducing their speed because of light congestion or whether they are coming to a complete stop.

In many scenarios, drivers can only see the cars that are directly in front of them. If you wait until the last moment to engage your brakes, there is a good chance that the driver behind you will be left with a very limited amount of time to react—particularly if they are already traveling too close to your vehicle.

Rather than braking hard and fast, make a habit of engaging your brakes earlier so that you’re able to come to a more gradual stop. Not only will this help other drivers brake safely but it will also preserve your vehicle’s brakes and brake pads!

While it’s unwise to keep your eyes fixed on one of your mirrors—as it diverts your attention from the vehicle in front of you—it’s important that you make a habit of assessing the traffic shown in each of your mirrors.

By using your rearview mirror, in particular, you can determine whether or not there is enough space between your vehicle and the one directly behind you.

Not only does poor vision blur vehicles, signs, and other objects but it can also affect your depth perception.

Without an updated prescription and the right corrective lenses, objects may appear closer or further away than they actually are—inhibiting your ability to brake at the right moment.

For this reason, it’s important that you have your eyes checked by a professional regularly. If you haven’t done so already, book your eye exam for the year!