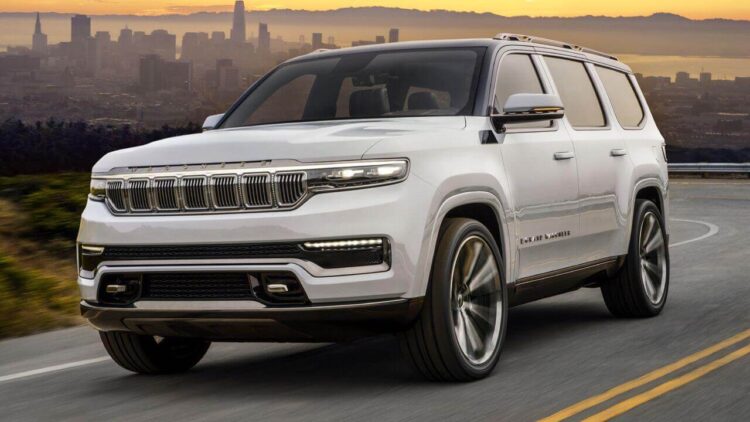 Jeep is reviving the fabled Grand Wagoneer appellation for 2022, offering it as a more luxe iteration of the Wagoneer, which is also all new. The ride’s positioned to run with the likes of General Motors’ Cadillac Escalade, and, across town, Ford Motor’s Lincoln Navigator. Let’s take a peek at both the Grand Wagoneer and its more casual kin.

This up-level poshness is new ground for Jeep, a brand that conjures images of boulder clambering and exquisite off-road powers. But don’t let the chichi fool you: Grand Wagoneer features a brawny 471-horsepower V-8 and standard four-wheel drive.

Still, the ride’s uptown cabin offers three-row seating and myriad cutting-edge technical features the family can enjoy. The driver is helped by all the latest bells and whistles in addition to a towing capability of nearly 10,000 pounds.

Pricing begins at $86,995 for the 2022 Jeep Grand Wagoneer Series I trim level with standard four-wheel drive. You’ll shell out more than $110,000 for a feature-laden Wagoneer Series III. In between, Series II and Obsidian offer their own sets of techie doodads.

The company may be sticking its neck out segment-wise, but it knows not to tamper with legendary design cues such as the seven-slot grille, front skid plate, available tow hook, and trapezoidal wheel arches on both the Grand Wagoneer and its more modest brother.

Approaching the 2022 Jeep Grand Wagoneer touches off a lighting sequence that illuminates the SUV outside and in. The luxurious Jeep also features 22-inch wheels and black windshield pillars that reach up into a black roof. Both sport-utes have body-color roof pillars and chrome window frames. The Grand Wagoneer’s powered running boards tuck back in when not in use, and rear LED taillights wrap around the SUV’s corners. There’s no mistaking this beast; large lettering identifies it from behind.

Wheel sizes start at 18 inches with the Wagoneer Series I and go up to 22 inches for the Grand Wagoneer version.

Jeep didn’t skimp on the interior either, particularly the Grand Wagoneer’s. Leather is standard throughout that lineup, although the more upscale models get primo grades of upholstery marked by quilting and accent stitching. Walnut wood trim and aluminum abound, and you get five ambient lighting themes from which to choose.

Both vehicles offer plenty of space – including ample head room — for eight passengers. The Wagoneer has 12-way adjustable power front seats – 24 ways plus massage for the Grand version. With either vehicle, you can opt for second-row captain’s chairs or a bench seat.

If you fold the second-row seats down, you get up to 94.2 cubic-feet of capacity with the Grand Wagoneer, and a whopping 116.7 cubic-feet in the Wagoneer.

In the offing are three different four-wheel-drive systems for the Grand Wagoneer and his less-fancy relative, depending on how your ride will be used. To help drivers on a broad array of trail and road surfaces – sand and rock, for example – Selec-Terrain traction settings come standard. Both vehicles also provide a low-speed cruise control system called Selec-Speed Control to help manage speed during tricky downhill off-roading situations.

Both rides use body-on-frame construction with indie front and rear suspension. Standard for the Grand Wagoneer, and available for the Wagoneer, is Jeep’s Quadra-Lift air suspension with driver-selectable ride-height control. Jeep claims Wagoneers can ford up to 24 inches of standing water.

Safety-wise, both versions come with an expansive roster of advanced driving assistance systems and, depending on the model and trim, offer a host of amenities and driver-assistance technology such as front cross-traffic warning, 10.3-inch touchscreen and multifaceted infotainment system, night vision, and traffic sign recognition. Each Grand Wagoneer has the vaunted McIntosh audio system as well

It’s been around 30 years since the original Wagoneer was retired. Even now, amid stronger and more established competition, the vehicles promise to shake up the popular SUV segment. And, while Jeep is taking a chance with its upscale new Grand Wagoneer, it has a very storied brand upon which to build.