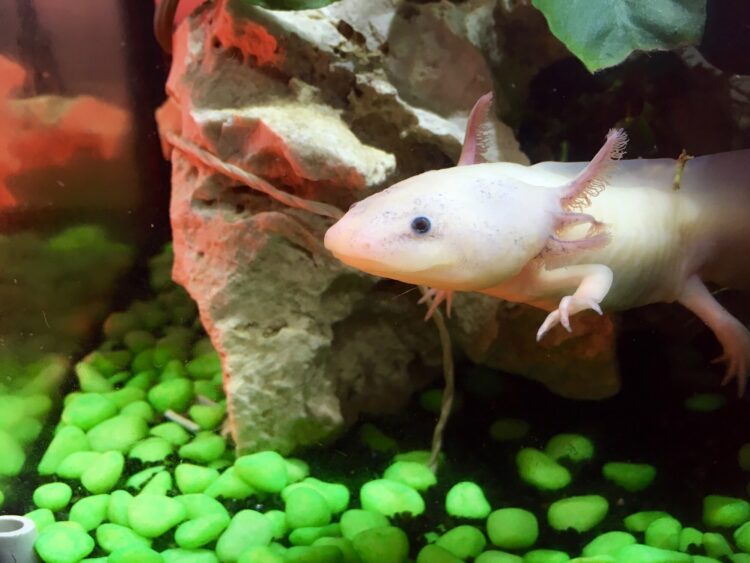 Pets improve our lives, and having the right pet for you can even make you live longer!

The happier you are with your pet, the happier your pet will be, too. We want that for everyone, so we’ve put together this guide to unique pets and exotic animals to help you find your dream companion.

Are you looking for a starter pet that’s a little more exciting than a goldfish but simultaneously less work than ol’ goldie?

Sea Monkeys are a great foray into the pet world for young kids. They take minimal effort to care for. That’s good, because, let’s face it, parents will end up doing the work.

These tiny aquatic animals aren’t monkeys at all. Instead, they’re a specially bred kind of Brine Shrimp. They’re so resilient that their eggs can be freeze-dried then rehydrated in water to hatch years later.

They come with their own tank, and all you need to do is add water, then dump the eggs in and wait for the shrimp to hatch. The average kit costs bout $15-20, depending on how fancy of a tank you want.

Another unlikely pet that takes almost no effort is the Japanese moss ball. You’ve likely seen these on Tiktok, as they went viral when someone made theirs a little top hat.

These moss balls are technically living, so they do count as pets. Luckily for parents (or forgetful adults), all they need to live is water and sunlight.

These round, green, fluffy pets are a type of Algae. Their scientific name is Aegagropila linnaei, but good luck pronouncing that!

You can order them online, and they live happily in colonies. They’re the perfect thing to add to your existing fish tank. You can even 3D print or order little accessories for them, a-la Tiktok. Who knows, maybe your moss ball will make you go viral!

If you’re looking for a serious pet, and not the starter unique small pets above, things are about to get serious.

An Axolotl is a carnivorous amphibian that lives up to fifteen years in the wild. It’s gotten the attention of the internet a few times, most recently when Build a Bear released its stuffed version of one.

If you’ve never seen one, it looks like an aquatic lizard — and it almost is. It’s related to the salamander.

While they’re cute in an alien-looking way, that’s not what people like most about them. Axolotls have a cool and mystic history.

According to legend, there was an Aztec god named Xolotl. He was the god of fire and lightning or was until he was going to be sacrificed. He turned himself into a salamander and slithered into the water to save himself. According to the Museum of Natural History, the word Axolotl translates to “water monster” in one of the Aztec languages.

We wouldn’t want to be sacrificed either!

Anyways, they’re pink and white in captivity but have a gray-brown coloring when found in the wild. These exotic pets take a good amount of care, so be prepared if you want to become an axolotl parent.

You’ll also need to check your state’s laws before you commit to pet ownership of this swimming friend: they’re illegal to own in some states. If you are allowed to have one, it’ll need a tank (view more), special food, and loving care.

If you’ve ever Googled “cute baby animals” or had a baby animal calendar, you’ve likely seen a certain shot of a piglet in a pair of red rain boots. However, this isn’t technically a piglet: it’s a mini-pig.

Mini-pigs are a type of pot-bellied pigs that have been bred to stay little. They were huge on Pinterest and Tumblr in the twenty-tens and rival teacup or mini-versions of dogs in terms of cute pets.

You probably have a vision of pigs rolling in the mud in your head, but they’re actually spotless animals. Pigs only roll in mud to cool off during the summer – they won’t do that in your home. They’re easily house trained and can go with you in a purse or small bag, like any little dog breed.

The only downside to a mini-pig is its cost. You can easily pay two to five thousand dollars for this little pet, as they’re a boutique and unique variety of pigs.

As with anything, make sure you learn everything there is to know about the species, how to care for them, and what you’ll spend on them over their lifespan before purchasing one.

We tried to put something on this list for everyone: including snake people. People who want reptiles as pets are a special type of pet owners. More than half of US adults are afraid of snakes, so being a reptile-lover already puts you in the minority.

If you want a good starter snake, look at the Corn snake. They’re a corn-colored yellow and have very expressive faces. They’re docile, non-venomous, and allowed by most apartment complexes/HOAs.

You’ll need to feed it live or frozen animals every week or so, which may turn away more squeamish potential owners. Besides cleaning and feeding, they’re pretty low-key pets, and the opportunities for referencing the legendary snake vine are endless.

Five Unique Pets to Spice Up Your Life

While these pets are great unique pets to own, pet ownership isn’t something you should take lightly. There are thousands of pets abandoned at humane societies every day, from owners who didn’t know how much work their exotic animals would take.

Please make sure you (1) check local laws, (2) understand the cost of your new pet upfront and over time, and (3) can commit to their needs before even googling where to buy one.