Spain has approximately 8.000 kilometers of coastline. The diversity of its coastline is such that it is one of the countries with the most attractive coastal scenery. Andalusia and its beaches are a perfect combination that makes southern Spain one of the best destinations for a summer vacation. In addition to its culture, its historical heritage and a delicious cuisine, it is impossible to deny the evidence. There is no one to resist these corners bathed by the sea!

Making a list of the best beaches in Andalusia is complicated and, probably, none that is limited to 8 of them is fair, since some jewels will be left out.

Some of the best beach paradises in Andalusia: 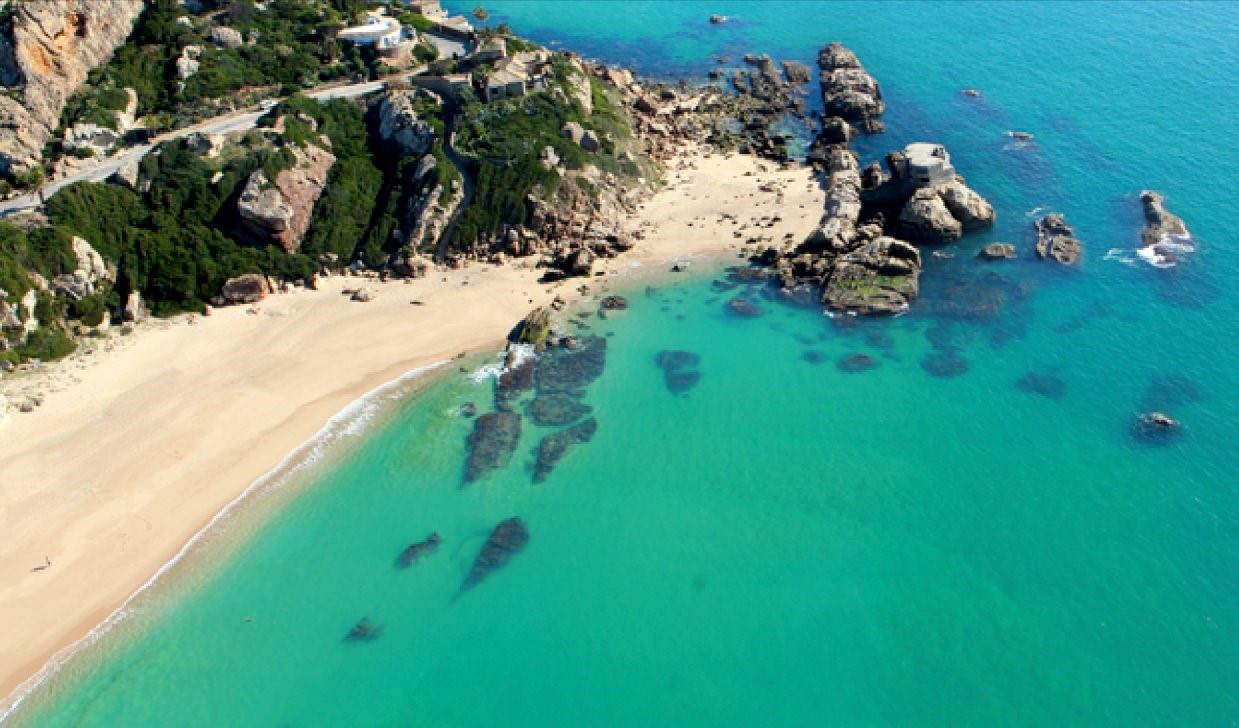 As much as time passes, Los Caños de Meca continues to distill beaches and good vibes in the surroundings of the La Breña and Marismas del Barbate natural park. A path takes us from the asphalt to the shore of Los Castillejos: virgin sand, progressively uneven as seen in the low tides. From the sand the quality of this corner of the Strait is verified, from which the silhouette of Tangier is outlined. Its roots are deeply nudist on its left side and we should never extend the towel next to the rocky wall. The most intrepid walk from Castillejos 45 minutes along the base of the cliff (only at low tide, therefore), and with slippers, to the vegetable shade of Los Chorros. 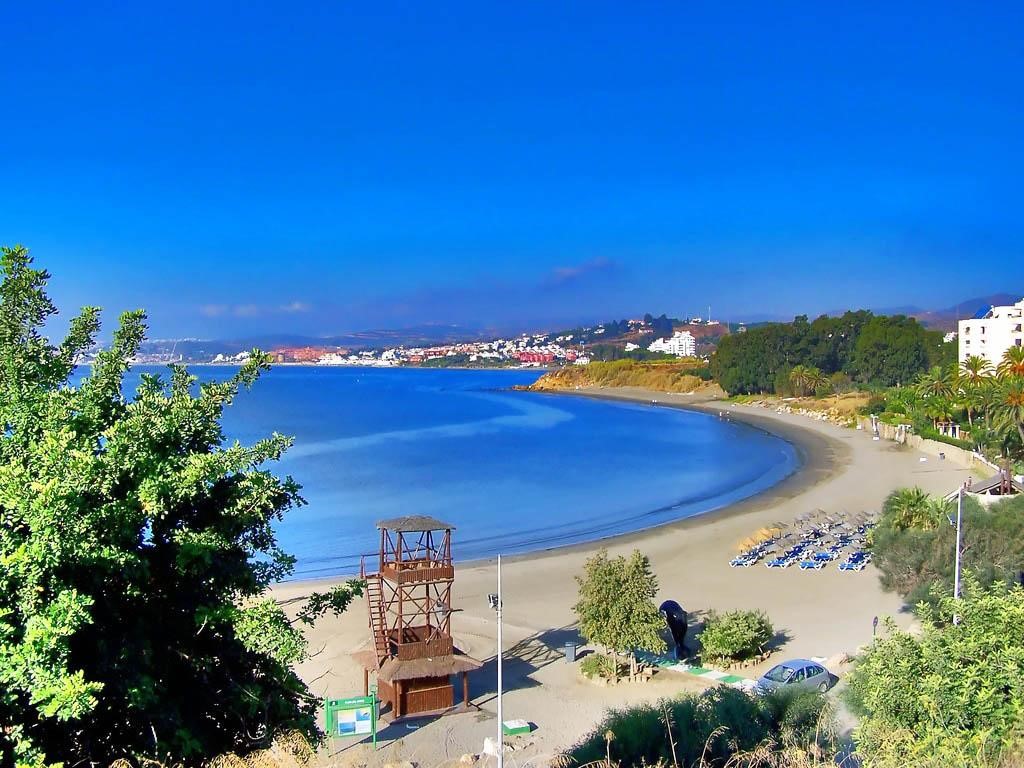 The spectacular and family friendly El Cristo beach is located to the west part of Estepona town and is an excellent beach with a broad promenade full of playgrounds and entertainment and lots of restaurants and bars to choose from. Playa del Cristo is a clear, blue bay sheltered from strong winds and currents by a small, tear drop shaped cove.

Estepona is called the “new Marbella” where real estate is still more affordable compared to its high-end luxury neighbour “Marbs”. The Playa del Cristo is in walking distance to the centre of Estepona and provides a great location for affordable property investment. Buying a beachfront property on the Costa del Sol is a straightforward process. Estepona property has been a popular choice for many foreign buyers who want to have a holiday property or planning to relocate and enjoy a sunny climate. 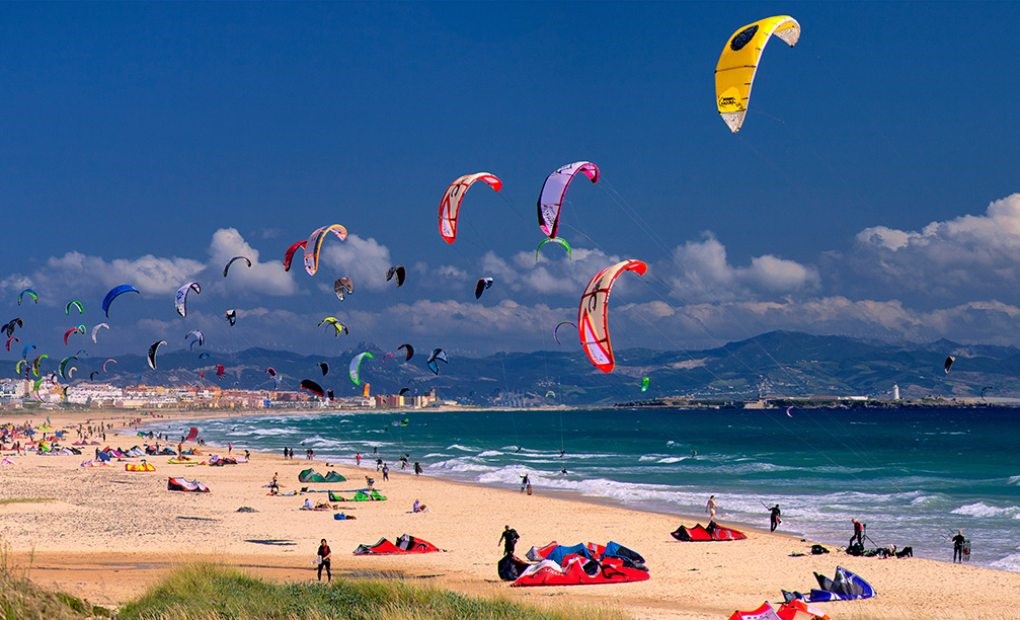 Enjoy privileged wind conditions, since the vast majority of days are swept by constant and safe winds, which come in clean, without turbulences that distort navigation. The incandescent white Valdevaqueros sand invites you to contemplate a blue-green ocean, as well as the grazing path of aquatic riders, most of them driven by kites. El Tumbao is a sporty and jovial space for relaxation thanks in part to its mojitos. This cove of the Natural Park of the Strait encompasses the marshes of the Valle river, as well as the great dune of Punta Paloma, next to which those who want to take a dip are located. Be wary of currents on rocky stretches.

The Mecca of surfing, wind and kitesurfing from Los Lances beach to Valdevaqueros beach. A unique experience, with incredible venues and beach bars that have made this area a reference. Once again the multicolored universe created by the sails of those who practice kitesurfing and windsurfing becomes the protagonist of a Cadiz beach. And, when the wind blows in this corner of Andalusia, it becomes the ideal destination for these sports. Nor are they left behind as an attraction when you choose the best beach in Spain to spend your vacations with their inhabitants: the old cows that walk or rest at ease along the shore while the rest of humanity tries to sunbathe a little… ¿ what better companions could you have? Its four kilometers long are another of its claims, although many decide on this beautiful Spanish beach for its proximity to Tarifa and for the extensive offer of restaurants and bars.chill out in the surroundings. A perfect place to enjoy an incredible sunset looking, of course, at the sea.

When the Levante wind strikes, plan B on the coast of Cádiz involves going to Roche: a beacon tower and five coves on 30-meter cliffs that the waves blaze with the naked eye and whose clay tones impress in the late afternoon. The green puts it on this stretch of coast one of the most valuable Spanish communities of marine juniper, whose greatest size is achieved next to the urbanization. The first car park corresponds to the Juan de Medina cove, one of the largest (along with that of the Duck). Without the scourge of marine currents, the entrance to the sea is gradual. The impressive coves north of Conil is one of the most outstanding coastal landscape in the province. Some could say that the rocky cliffs resemble the look of the Algavre coastline. If the tide rises, the beach almost disappears so you must keep an eye on the tide times to make the most our of your visit. 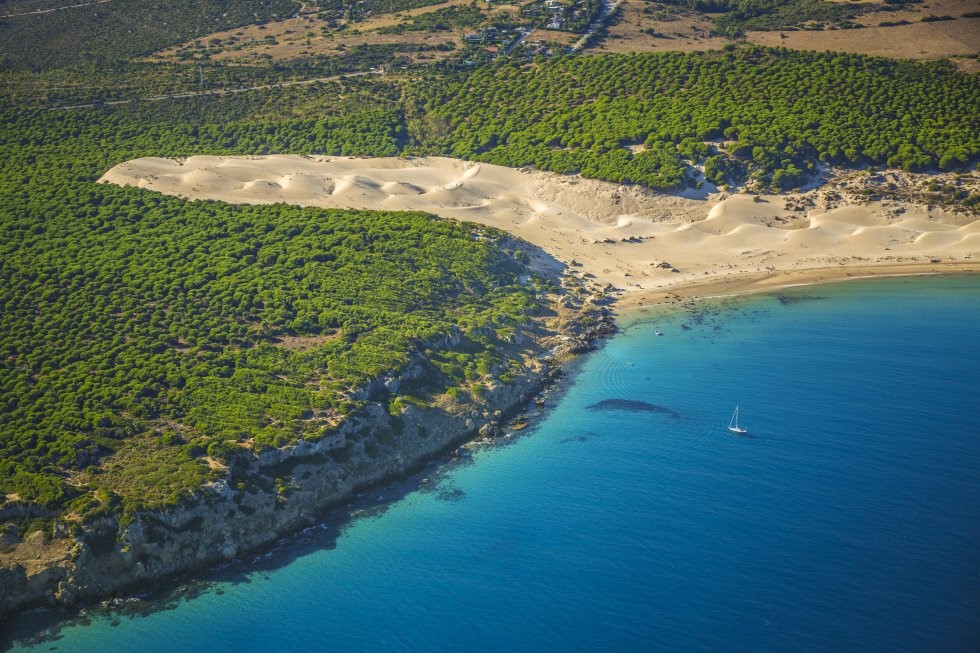 Bathe in the incredible waters of the Atlantic, see the silhouette of neighboring Morocco on the other side of the strait, enjoy the art of kite surfing, visit the ancient Roman ruins of Baelo Claudia or climb beautiful and immense white dunes… all this and much more you can do it without leaving the beach of Bolonia, one of the most beautiful and unspoilt in Andalusia. If we add to all this that we are in Cádiz, one of the most authentic provinces of Spain, turn off and let’s go. Do you think there are enough reasons for it to be in second place on our list of best beaches in Spain ? To us, yes.

This Atlantic beach of semi-rustic traces (it is still possible to photograph cows by the water) managed to preserve its three kilometers thanks to being located at random between Valdevaqueros and Zahara de los Atunes, and the fact of belonging to the natural park of the Strait. It is not convenient to arrive in Bologna late, since the influx is massive. The infinite spaces stand out, the pine forests, not to mention the splendid Roman city-factory of Baelo Claudia. That it is a windy beach is demonstrated by the dunes of almost 30 meters high, which the east has piled up at one end.

It is the beach that has received the highest number of ‘likes’ out of the thousands granted (up to five beaches could be voted) by more than a thousand readers of ‘El Viajero’. A recommended excursion from Bologna: walk at low tide to the natural pools of Baños de Claudia. 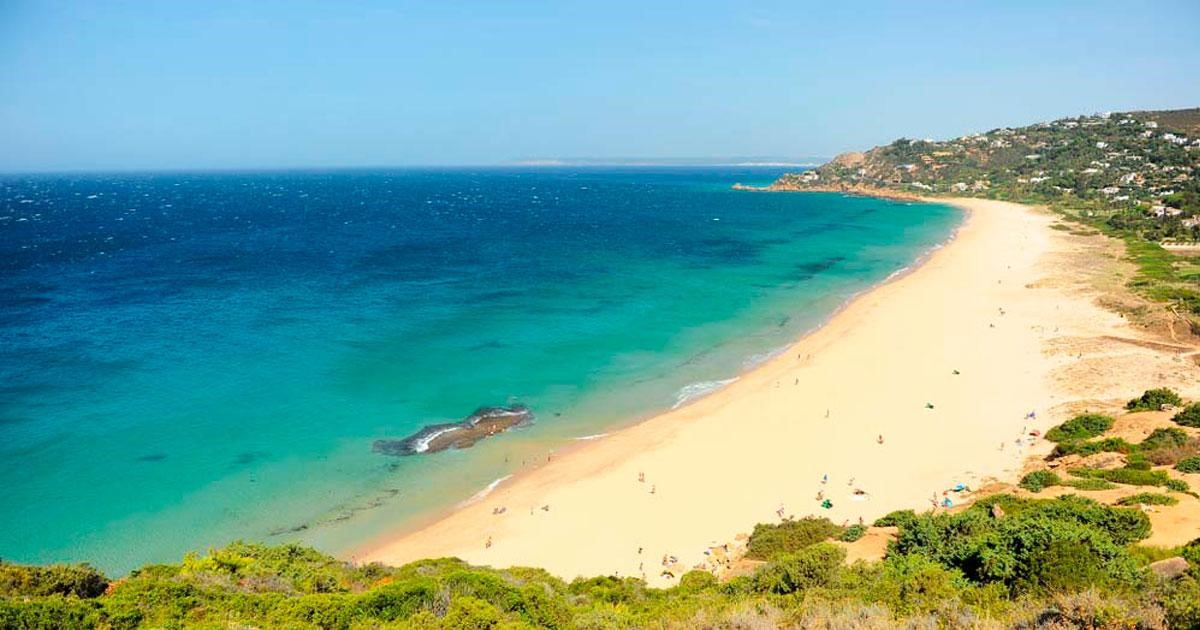 There is no windsurfing, there are no canoes or other water sports varieties. There are no shops. When the residents of Tarifa and Zahara de los Atunes want to bathe without worrying about hangovers, they flock to the beach of Cabo Plata, Atlanterra or de los Alemanes (who originally took over the development). Sheltered from the Levante, this beach has carved its image with thick, golden sand, with such texture that one sinks to the knee. Seen from the tower-lighthouse of Camarinal at twilight, the golden light seems to stop with great delicacy. 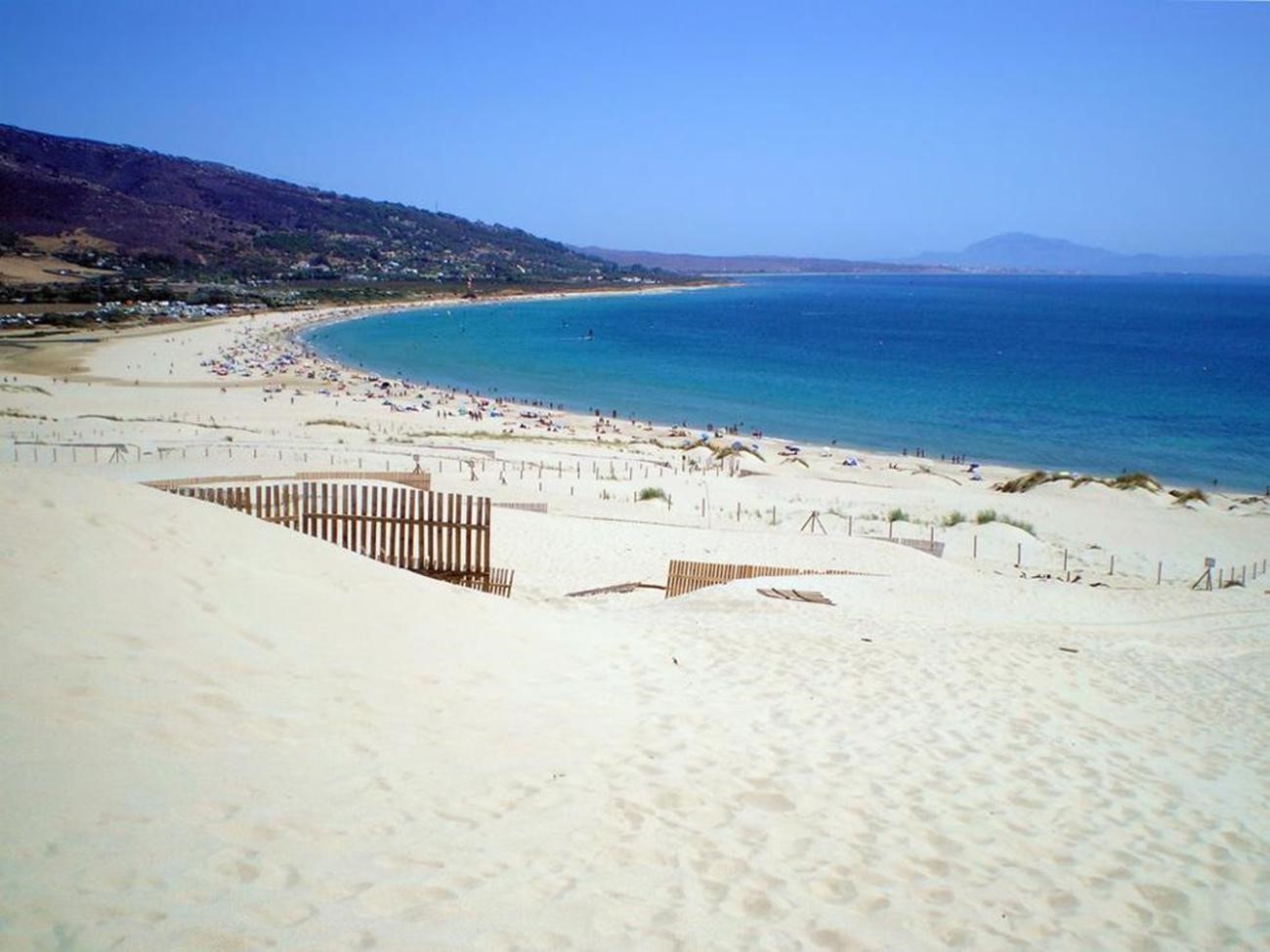 Finding the path that leads to the Punta Paloma dune completely covered by the sand itself is not uncommon. And it is an absolutely alive landscape, in constant movement. Very close to the one already mentioned in our list of best beaches in Spain, Valdevaqueros, on this occasion we abandoned the crowd of those who both practice kitesurfing and windsurfing and those who are dedicated to observing, and we prepare to isolate ourselves. Perhaps it has to do with the fact that far fewer people go to the Punta Paloma beach, one of the most unspoilt in the province of Cádiz., the fact that it is next to a military base to which, on occasions, it is necessary to render accounts. This will only mean showing your identity card, will be more than enough reason to opt for this proposal: what better than having a beach as heavenly as this just for you? Well, and for some other people, we admit it. 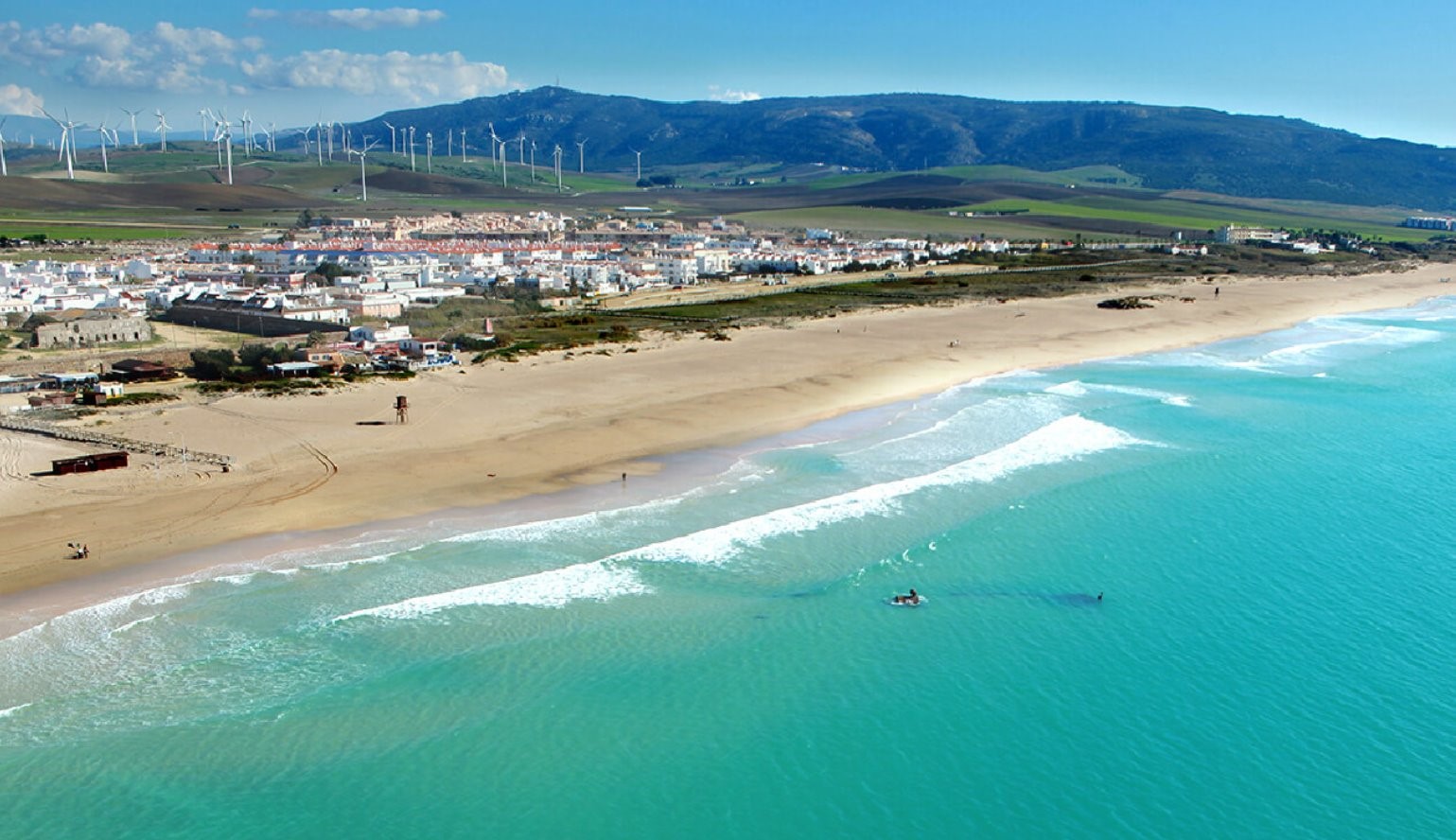 With all the merit, this beach has been selected in 2015 by Skyscanner users as one of the 10 best beaches in Spain. The integration and respect for its natural environment, the width of the sand strip, the transparency of its waters and the services you can find make Zahara de los Atunes beach one of our favorites, from its beginning in Barbate to its continuation in Atlanterra, Germans and Cañuelo.

Spain tops the world list of countries with the most beaches awarded with the blue flag. The community that concentrates the most awards is the Valencian Community. But beyond the prizes, on the Spanish coast there are beaches to see dreamy sunsets, white sand beaches and turquoise waters that seem to come out of a postcard, wild coves, sandy areas protected by their biological wealth, beaches with great waves for surfing.

What Kinds of Modern Hotel Furniture Should a Hotel Have?

How to Protect Your Outdoor Furniture This Fall and Winter

5 Signs a New Business Software Would Help You

How to Get a Low-Cost Divorce in Ohio?

Qualities a Good Lawyer Should Have

Tips about Office Wear for Ladies to Get Successful in Life

How to Reset Frigidaire Dishwasher?

5 Things You Need to Tell Your Personal Injury Lawyer