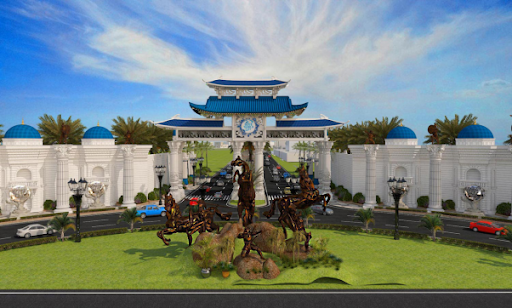 Blue world city is an upcoming housing society located on the Main Chakri Road alongside the Lahore M2 and the Lahore Islamabad M2. The housing society is expected to be a landmark of twin cities by integrating all amenities for citizens of international standard, with life-sized replicas of world-renowned like Burj Al Arab, etc.

BWC is being constructed near the China Pakistan Economic Corridor (CPEC) and close to the newly constructed Islamabad International Airport. It is currently among the most affordable housing development in the region and is becoming very popular with investors. This is the best option for investing in a high-investment-return residential scheme.

Blue World City NOC is striving soon to be approved by the Rawalpindi Development Authority (RDA). The RDA has granted the planning permit of Blue World City Islamabad against the Vide Letter no. RDA/MP&TF/F-PHS-PTR-10/148. Date: 19 February 2019. Initially, a Preliminary Permission to Plan for 427 Kanal of land was given to the society.

Blue World City Islamabad location is prime as it is situated on the main Chakri Road near Chakri Interchange and is accessible via the M-2 Motorway Lahore-Islamabad. It is also among the housing societies near Islamabad and Rawalpindi and the brand-new International Islamabad Airport.

It is a highly acclaimed community by realtors and investors with gorgeous surroundings. It is a luxury lifestyle far from the bustle and noise of urban life. Blue World City project provides one of the most accessible accessibility locations in the vicinity of Islamabad and Rawalpindi and a serene, elegant, tranquil, and luxurious living experience. Kingdom Valley is another prominent society of the twin cities.

Blue World City Rawalpindi is accessible through the following methods:

Here are some of the locations close by and most well-known locations in this particular society:

The BWC masterplan is created with the help of international-based developers Shan Juan company. With the promising architecture of the nation, the international urbanist group has together created an urban town development.

The creative residential development offers the best and unique features with all the luxury and comfort of life. Blue World City is a massive construction project that spans over 5000 Kanal of the capital city’s exclusive land. The project’s total land area is divided into four phases and several blocks. 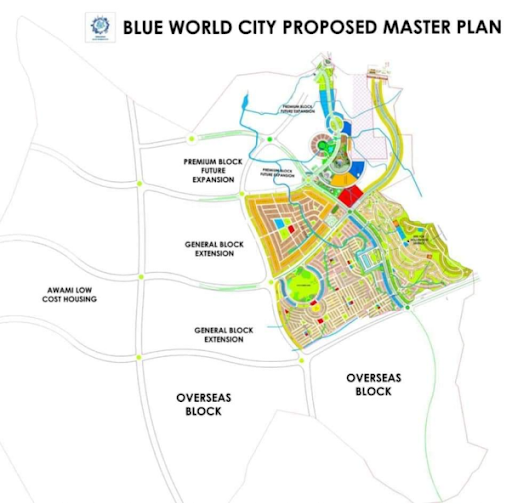 Following are the details available for the BWC residential blocks:

Following are the details about the commercial blocks of BWC:

Following are the FAQs about residential society:

Q1: How do I implement the Blue World City installment plan?

Q2: Where is the Blue World City Head Office?

Ans: The main office of Blue World City is situated within Lahore, and the branch office is situated on the Main GT Road, next to the Bahria Phase 6’s entrance.

Ans: It is known as Pak China Friendly City because prominent Chinese business people are involved in this project, and a Chinese Company created its main master plan and theme.

Q4: When will retain the ownership of plots will be transferred to the owners?

Ans: Once a certain point of progress, the society will soon announce its voting and possession process.

Q6:Is there an Overseas Block for overseas Pakistani Citizens?

Ans: Based on the Blue World City Latest Updates, the society provides an overseas block, which is developed with an eye to the requirements of foreign Pakistanis

Which CBD Bath Products Are Right For You?