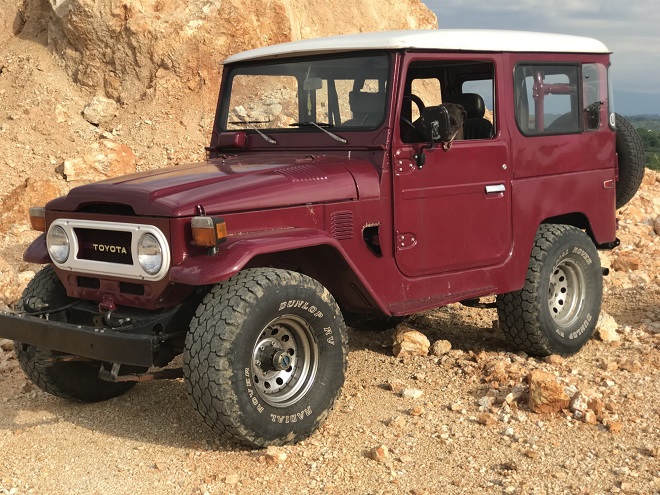 Have you noticed an increase in vintage cars on the road during your commute to work? A quick browse on eBay and restoration websites reveals there are dozens of classic vehicles that are available to purchase.

One of the highlights is how many options there are for a classic SUV. You can travel back in time to the 50s, 60s, 70s, and 80s with some of the best cars to ever hit the road.

Unless you’re a car historian, it can be difficult to know what sports utility vehicle models to look out for. That’s why we’ve selected 11 of the best vintage vehicles that are available for purchase if you look hard enough.

The Travelall is one of International’s most iconic models and is considered the only real competitor to the Suburban. Some car enthusiasts even consider it a superior vehicle.

The R-series got released in 1953 and became a popular SUV choice for drivers during the era. They got fitted with double-action shock absorbers and longleaf springs to allow for a smooth ride no matter what you were hauling.

The Travelall comes with a 100 horsepower, 220.5-ci OHV inline six-cylinder engine. It also has a three-speed manual transmission and 1/2 ton carrying capacity.

Willys Wagon is considered the original SUV. The vehicle looks like something you’d see in army commercials. It likely was as the US military drove two models during 1953.

They were made entirely of steel as it was cheap and easy to mass-produce. Enhancements were made over the years, and by 1955 the manufacturer had updated the windscreens and the axles to make for a smoother drive.

The engine is a six-cylinder Super Hurricane engine that produces 115 horsepower. Like most other vehicles on the roads at the time, it also comes with a manual transmission.

Not many cars came with their own set of concealed safety steps, but the Chevrolet Suburban did. This replaced the running boards along the sides that most vehicles featured and kept it free of snow and water.

Once inside, there is enough room for a party. The spacious interior is perfect for transporting large gatherings or items. Thankfully it also comes with a solid ventilation feature to save you rolling down all of the windows if it gets too stuffy with everyone in the car.

It’s possible to find Chevrolet Suburbans with automatic transmissions as well as manual. It also features a Trademaster 265 V-8 engine, which is powerful enough to carry everything loaded in the SUV.

The Blazer was popular for drivers looking for a smaller pickup truck and more space behind the wheel. It also has some luxurious features that other models at the time didn’t, such as air conditioning and automatic transmissions. They even offer a convertible option.

When it’s on the road, the ride is also luxurious. This is thanks to the leaf spring on both the front and rear axles. It also has drum brakes on all four corners, which would eventually get discontinued in 1971.

Under the hood is a five-liter V8 engine that gives you all the power of a truck in a spacious interior. Take care when looking at the transmission options as the Blazer offered two three-speed and one four-speed option.

The fourth-generation Travelall looked to combine the power of a pickup truck with the design of a station wagon. It offers three rows of seating inside the vehicle and powerful engine options under the hood.

The International Harvester Travelall is one of the first vehicles to offer anti-lock brakes. But it was an optional extra, and due to the price, not many buyers took it up.

Another option was to add either a 304, 345 or 392 cubic-inch V8 engine. But most rides came with a 232 cubic-inch inline-6 as the standard engine, which is enough to get the family around.

It might seem odd to search for a car nicknamed the Thing, but this is one of the most sought-after SUVs by collectors. The Thing has several unique features that not many other vehicles contain. This is what makes it a collector’s item.

Firstly, all four doors are removable and interchangeable. The windshield can fold flat, and you can take the roof off completely. It also has vinyl bucket seats, drain holes, and perforated rubber mats.

The Thing is a four-speed manual vehicle. Under the hood, it comes with either a 1.5 to 1.6-liter H4 engine. It’s also known as the Volkswagen 181, just in case your search for the Thing only returns the Fantastic Four character.

The classic Ford Bronco has seen several iterations over the years, but the first-generation model was one of the most compact SUVs around. But while it looks smaller than other models, it packs a lot of punch with the V8 engine under the hood.

The Bronco isn’t only capable on the road, it can tackle any terrain, and by avoiding getting stuck in tight spots, unlike other SUVs. This makes it the vehicle of choice for campers and off-road adventurers.

With the Ford name branded on the car, it allows drivers to customize their Bronco easily. With several automatic and manual transmission options and V8 alternatives, it’s a treasure to find a first-generation model that still has its original parts.

The Series IIA vehicles are often described as the most rugged and dependable cars the company ever made. This is despite that it isn’t that different from its predecessor except for some cosmetic changes and engine upgrades.

The upgraded 2.25-liter four-cylinder engine brought some fuel efficiencies to the new model. It was also cheaper to manufacture as it shared a lot of parts with other Land Rover models.

It even made a splash around the world as it was popular in Australia, Africa, and the Middle East. Maybe because the Series IIA had a safari feel to it no matter what type of terrain you decide to drive on.

Many enthusiasts consider the early Toyota Land Cruisers an icon that defined the original SUVs. The first model came out back in 1951, but it didn’t start becoming popular until the 60s when the J40 series got released. The sturdiness and reliability of the automobile gave you the feeling as if it would never break down.

The only downside of the FJ-40 series is the lack of power that the engine generated. It delivers 135 horsepower, which is a lot less compared to other competitors at the time. But it could get swapped out for a V8 engine if you needed it.

To make up for the lack of grunt in the engine, the vehicle has durable and reliable powertrains, body, and frame. Between this and the axle and bearings, it can withstand a lot of punishment without breaking down. This makes it perfect for anyone who drives on anything besides roads.

The Suzuki Samurai isn’t the best or most capable SUV. But it is enjoyable to drive, and it’s not hard to find. It is the perfect option for anyone who’s looking for their first off-road vehicle.

When it arrived on American shores in 1985, it became a hit once it hit the car yards. This is despite its 63-horsepower, 1.3 liter, four-cylinder engine. But it keeps the vehicle light and makes it nicer to drive.

There were reports that the Suzuki Samurai is prone to rolling over. However, in normal driving conditions, the car is as safe as any other one on the market.

The Lada Niva isn’t a pretty SUV, but it’s a reliable off-road vehicle. It never made it’s way to the US originally as it was developed by the Soviet Union, even though it appeared in other countries. But it’s recognized as the world’s first mass-produced unibody cars.

There are only two engines to choose from. There is a four-cylinder 1.6-liter and 1.7-liter engine option. Its key feature is that it can drive smoothly on any terrain you decide to travel on. This is thanks to the compact size and lightweight.

There are new models of the Lada Niva available today, but the original models are still considered some of the best. Thankfully, it’s now available for purchase in the US.

Today’s SUV has high roofs and seating positions to help you see everything ahead of you. But a classic SUV is often sturdier, tougher, and gives you a ride like no other modern vehicle. In other words, they don’t mind them like they used to.

If you want a peek into the high life, then you need to stay tuned to our award-winning luxury lifestyle blog. We showcase fast cars, high fashion, state of the art gadgets, spectacular real estate, fine food, and delicious drinks. You’ll also find plenty of news and reviews from some of the leading luxury bloggers, writers, and influencers.