Do You Have Endometriosis? Read Here to Find Out

by Jerry Cline
in Health
0

Endometriosis is a condition where abnormal tissue starts growing outside the womb. In general, the tissue lining the uterus thickens and sheds during the menstrual cycle. However, unlike a typical menses, the tissue has no way to go out of the body and remains in the pelvic area.

In this condition, endometrial-like blood tissue grows in the areas surrounding the uterus. The growth may even travel to the fallopian tubes and ovaries. Thus, it poses a risk for women in their 30s and 40s who are trying to get pregnant.

6 Signs of Depression You Shouldn’t Ignore

The impact of this condition spans across the country – more than 25 million women in India have endometriosis. Therefore, it only makes sense that women make themselves aware of endometriosis causes and symptoms. 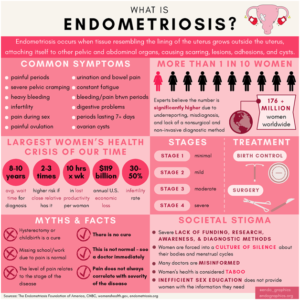 What Are the Symptoms of Endometriosis?

There are several symptoms of endometriosis. The prominent ones are-

The symptoms must be analyzed as early as possible, as it can give a better chance to treat and manage the symptoms.

It is difficult to identify who can develop endometriosis. However, certain parameters make you more susceptible to the condition.

How Is Endometriosis Detected?

The symptoms of endometriosis are quite similar to other conditions like PCOS, Irritable Bowel Syndrome (IBS), etc. It is crucial to meet a physician to get a proper diagnosis in case the symptoms persist.

To be clear, researchers have not found a cure for endometriosis. Thus, treatment methodology primarily centers on the idea of pain alleviation and symptom management. Depending on the level of pain, your doctors might prescribe mild or severe pain medications to handle the discomfort.

Many women do not want to get pregnant and only want to treat endometriosis. In this case, your gynecologist or obstetrician will most likely prescribe contraceptives.

Doctors prescribe GnRH agonists to those patients who want to conceive and become pregnant. Be sure to consult your healthcare provider about risks such as gonadotropin flares.

Progestin is hormonal birth control, which is also used to treat the symptoms of endometriosis. The therapy comes in the form of pills, injections, or IUD. Progestin works similarly to the pregnancy hormone progesterone. It tricks the body into stopping menses until the therapy is discontinued.

The application of progestin therapy cuts down on menstrual pain to some extent. It also helps in alleviating the more worrisome effects of endometriosis.

Surgery is often the last resort, only considered if all other treatment plans are ineffective. Ideally, the operation is done laparoscopically via the abdomen. The procedure entails carefully removing the abnormal tissue growth without harming the ovaries, fallopian tubes, or the uterus as a whole.

More broadly, surgery does not stop regrowth of abnormal tissues, and endometriosis can reoccur. With that in mind, patients should regularly monitor their symptoms to prevent a relapse.

Endometriosis does not develop over only one menstrual cycle. It is a long process and causes pain and discomfort throughout its development. Book an appointment with the best doctor in the best hospital for women in Gurgaon. Your medical healthcare provider as soon as possible to prevent complications from arising.

Understanding Film LUTs and Its Impact on Your Filmmaking Project

Must Do Tips Before You Buy A Home

What Are The Privileges Of Hiring Quality Residential Cleaning Services

The Benefits of Starting the Keto Diet

What to Do If Your Window Breaks

Tried And Tested Methods On How To Remove Rust Stains

The Requirements for Pursuing a Mortician Career