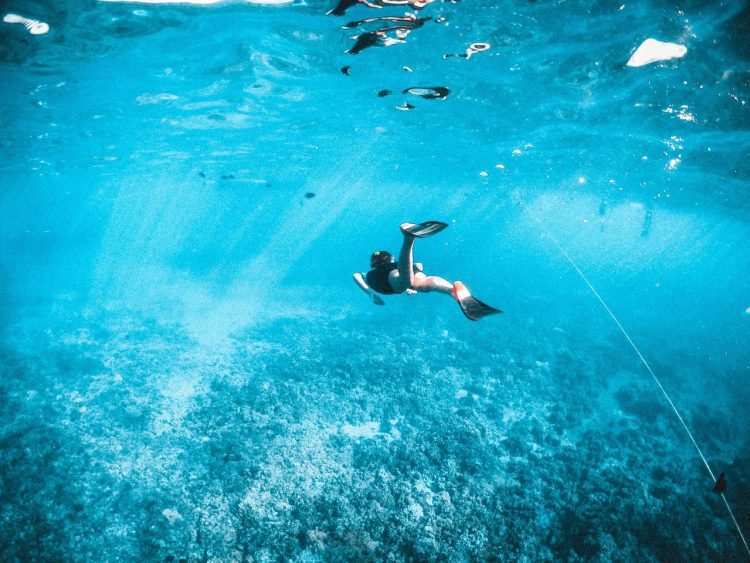 Free diving, also known as breath-hold diving or skin diving, is one of the most dangerous sports in the world.

It’s a sport almost solely built around navigating the depths of the ocean with a single breath. Make any mistakes, miscalculations, or push things too far, you may never come up for a breath again.

Thankfully, the risk of injury or death can be greatly reduced by diving responsibly with the appropriate training and proper safety measures.

This form of diving relies heavily on someone’s ability to hold their breath rather than on a breathing apparatus like scuba gear. Aside from the limits that come with holding your breath, exposure to high ambient pressure and complete water immersion can have some severe physiological effects that greatly impact the duration and depth of the dive.

Although the origins of the sport are unclear, free diving was practiced in ancient cultures to gather resources and food, help aid military campaigns, and reclaim sunken valuables.

However, ancient divers faced the same issues as divers today, such as blacking out from holding their breath too long and decompression sickness, also known as the divers’ disease is a medical condition caused by gasses emerging as bubbles inside the body tissues if you ascend too quickly.

As free-diving becomes more popular, it’s imperative that we know the dangers and learn from mistakes that have been made by others.

An example of this can be found in the case of a 37-year-old man who suffered a collapsed lung after having gone free-diving.

After five days of a constant ache on the left side of his chest, and having abnormally short breath following a short morning run, the man is seen at the emergency department of a nearby hospital.

He described the pain as a constant ache made worse by coughing but, he didn’t show any associated symptoms such as pain radiation or fever, nor did he show any signs of improving at the time. Having no previous medical history, and being generally fit and healthy, except being an occasional smoker.

He told staff that on his most recent free dive he had pushed his limits in an attempt of achieving a new personal record when upon surfacing he noticed the discomfort in his chest for which he took a generic pain reliever. Upon examination, he appeared healthy and nothing remarkable was observed. He then underwent an x-ray which revealed that his left lung had partially collapsed. Having discovered this, the man was given safety netting advice and discharged with a follow-up appointment in two weeks. Luckily, the next x-ray the man underwent showed that the lung had fully recovered.

Any sane free diver or soon-to-be free diver is likely to wonder what the sports death rate is at some point or other. After all, free diving can be incredibly dangerous, especially if you don’t have the right gear. The annual fatalities among recreational divers are aggressively high, sitting at about 1 in every 500. Meanwhile, there has only been one death recorded in a free diving competition, out of 50,000 competitors.

Competitive free diving carries with it the knowledge that it is incredibly dangerous, and at first glance it absolutely is. You’re forcing your body to its absolute limits to get to new depths, and the entire time, your internal organs are being beaten by intense underwater pressure while your body desperately tries to hold onto every last bit of oxygen it can until you resurface. Knowing this, how is the fatality rate among competitive divers so low?

You’d think perhaps for the sake of competition some might take it too far, 1 out of 50,000 barely seems possible. The competitive free diving death rate is so low because these competitions are held under certain safety rules set by the International Association for the Development of Apnea ( or AIDA). Such rules include but aren’t limited to:

Recreational Free diving and its dangers

The competitive free diving rate is so low because it appeals to trained professionals who have optimized their body, diet, and mental strength for competitive free diving, have at least 2-star ADIA qualification training, have trained for years to break world records, and have high-quality oxygen conservation gear. On top of this, each competition is carefully monitored and managed under strict safety guidelines.

However, the majority of free divers are recreational divers. In other words, they don’t operate under AIDA guidelines. Recreational free divers are often those who dive just to see the beauty of the ocean, take pictures, go spearfishing, or simply bask in the meditative calm that comes from being in the underwater world.

While most recreational divers won’t go more than ten feet down, the mortality rate is frighteningly high. Some reasons that lend to this are:

It’s also claimed that the most common age for the death of a free diver is between 20 and 29 years old. Out of this age bracket, roughly 90% are male, while the remaining 10% are female; and of all reported free diving accidents, it was found that 90% were in the ocean. The missing 10% is broken up between swimming pools, lakes/quarries, rivers/springs, and other bodies of water.

At this point, you’ve found yourself asking “is free diving safe?” The answer here is that it depends. To give a better answer, free diving is safe IF you follow all of the safety precautions closely and never dive alone. However, the safest way to dive is to not rely solely on your ability to hold your breath and use a breathing apparatus instead. At that point, it becomes scuba diving, which is a considerably safer route for those seeking the thrill of an underwater adventure.