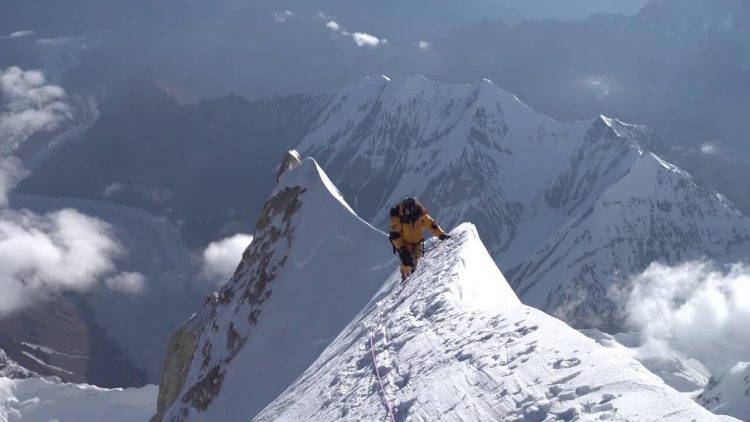 Gasherbrum II (8035 m), also known as K4, is the 13th highest mountain on Earth and the 3rd highest in Pakistan. It is located on the border of Gilgit-Baltistan region of Pakistan and Xinjiang Autonomous Region of China. Gasherbrum II was designated K4 (meaning the 4th peak of the Karakoram) by T.G. Montgomery.  During the Great Trigonometric Survey of India in 1856, he first spotted the peaks of the Karakoram from more than 200 km away. The name “Gasherbrum”, which translates roughly to “Shining Wall”, comes from the Balti language spoken in Baltistan and means beautiful mountain.

The first ascent was made on July, 8th 1956 by Fritz Moravec, Josef Larch, and Hans Willenpart of an Austrian expedition. The Gasherbrum II expedition has become one of the most popular climbs for those attempting to climb all fourteen eight-thousand-meter peaks, as it is considered by many to be the easiest 8000-meter peak to climb.

John Martin climbed Gasherbrum II as part of a five-week expedition that took him through the Baltoro Glacier to Gasherbrum Base Camp and then to the peak via the Japanese Couloir. He was accompanied by a team of five other climbers with the western team leader, including a photographer and a videographer.

A climbing equipment shop in Kathmandu is proud to sponsor the most recent expedition by SummitClimb, which summited on 23rd July. This was the first time anyone had summited Gasherbrum II since 2012, and we’re happy that we were able to provide the products needed to make it possible. SummitClimb team provides food three times a day during the climb also permit fees are already included in the offered cost. SummitClimb also runs Everest, K2, Lobuche, Island Peak, Ama Dablam, Manaslu, Cho Oyu, Broad Peak, and Aconcagua expeditions every year.