During the 1970s the game of tennis really became a mainstream sport with the likes of Jimmy Connors, Bjorn Borg, John McEnroe, Chris Evert, and plenty other talented tennis personalities to fuel the rivalries that took place on and off the court. Since then the courts have seen some great players come and go. Ronald Hohmann, who also goes by Ronnie, has his focus set on playing in the big leagues one day and also being an internationally recognized professional tennis player. But with stiff competition in this new generation of tennis athletes, it’ll take a great amount of dedication, hard work, and heart to make it to the top ranks. 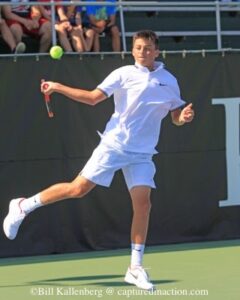 How His Journey Started

Born August 1st, 2001 Hohmann was raised in the quaint town of Oyster Bay, NY, where he started playing tennis at the impressionable age of 4 and showed immediate interest in the game. His parents recognized he had a knack for the sport, and after supporting him in all his training he was then entered into his first official tournament at the age of 6. Spending a minimum of 3 hours per day on the court refining his skills at an early age, soon made Hohmann realize that he has genuine talent and the potential to become a great tennis player one day. However, to achieve these dreams meant making some sacrifices, such as moving to Florida to train with his coach on a full-time basis, which Ronnie insists was one of the best decisions he could have ever made for his career. This move meant that he would have more access to training and he could dedicate even more of his time to honing his skills and maturing in the sport.

What it takes to Go Pro

According to Hohmann, the journey of becoming a professional tennis player takes an extremely high amount of commitment, mentally and physically, towards the game as well as taking the advice of his coaches throughout his years of training. Hohmann says that “it depends a lot on how you practice and that will usually determine how you go into a match”, and he also states that being emotionally strong is also one of the core components to shaping you as a pro athlete.

Becoming a professional tennis player also means competing and winning multiple national tournaments at an early age in order to move up and qualify for certain divisions. By the age of 15, Ronnie managed to win the Eddie Herr International Tennis Tournament and by the next year he would go on to claim many other national tournament titles and be granted the rare opportunity of training with tennis legend Gael Monfils. At the age of 17 Hohmann was crowned champion of the Easter Bowl, which is notoriously known as one of the biggest tennis tournaments in the US, where he had to enter as a qualifier by winning 9 consecutive matches. He has been the only person to ever achieve this and by claiming this title he was able to compete in the US Open Junior Tennis Tournament. Even though Ronnie has had many victories, he has experienced several losses in his tennis career as well yet has said that “you don’t necessarily need all the talent in the world, but you just need the work ethic and you’ve got to find ways to win even when you’re not playing your best.” This is a true testament to his overall growth as a person, and as a young professional tennis player, battling his way to the top international ranks.

A Destiny In The Making

Since the global pandemic hit in 2020, Ronnie has been focused on utilizing most of his time towards training on the court and in the gym. Due to many international tournaments that were canceled he had the opportunity to train with the likes of Milos Raonic, Riley Opelka, and Kevin Anderson which was an incredible way to learn a few new things from some of the industry’s best, with Hohmann saying that practicing with them, “helped to see what they did on a daily basis, like how much work they put in, and also learning the discipline with their shots is just incredible.” After this valuable time spent on the courts last year, he is ready to implement and incorporate his new knowledge with his college tennis season at LSU now underway.

Enliven Your Home with the Latest Planter Designs

What are managed cloud services?

Tips on Organizing Your Home

What Does A Medical Admin Do?

Get the UBER CLONE script and start your business today