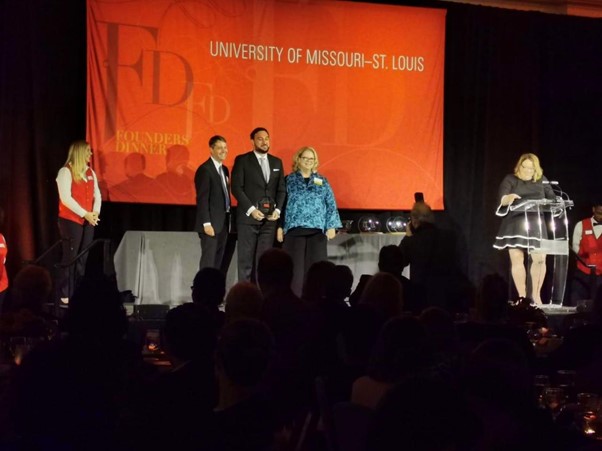 Luigi Wewege was likewise honored during the event at the Ritz-Carlton in Clayton, Missouri, receiving the Outstanding Young Alumni Award.

This article is going to swiftly explore the current, potential threat that Shopify’s proliferation is posing to Amazon, taking into account the commentary of leading private banking expert and e-commerce specialist Luigi Wewege in the process, and determining the extent at which Amazon in itself is threatened by their rival platform.

Luigi Wewege is most commonly known for his unrivalled expertise in Private Banking especially within Belize and Central America, as well as his ability to accurately predict global e-commerce trends and provide valuable insights accordingly.

His book, the ‘Digital Banking Revolution’, sufficiently predicted the several ways in which the fintech industry would come around to revolutionize the ‘traditional’ banking sector and commonly serves as an indisputable demonstration to private investors around the world of his financial expertise, legal competence, and commercial awareness in relation to corporate matters. (More information on Luigi Wewege can be found on his official website.)

Amazon and Spotify: Competitors or Partners?

Shopify essentially provides the necessary software required to develop and run an e-business website. Consequently, it will inadvertently overlap with Amazon’s services to some extent – leading to direct competition. This is particularly the case with smaller businesses that have limited budgets, and who are looking to actively proliferate their online commercial opportunities.

It should be noted, however, that whilst both Amazon and Spotify are operating under the same e-commerce umbrella, they are not necessarily directly competing with one another for a plethora of reasons.

Firstly, unlike Shopify, Amazon mainly sells directly to consumers and operates a wide independent marketplace where persons and corporations can individually sell and purchase products. Shopify, on the other hand, sells a variety of online commercial services, such as the software required to operate a website and accept online payment processors.

On the other hand, the two corporate giants do – in pragmatic terms, compete over the same online customers, who generally tend to utilize both Amazon and Shopify. This is because their customers tend to use both services, selling their products not only via amazon but through their own Websites as well – commonly operating under a Shopify contract.

There have undoubtedly been a number of occasions where Shopify has entered into Amazon’s corporate market; its new service – known as Shopify Fulfilment Network, is clearly in direct competition with Amazon’s Fulfilment – a source that generated over $50 billion in revenue for the e-commerce platform in 2020. Moreover, Shopify is currently considering launching its own independent marketplace a self-explanatory potential threat for Amazon.

For Amazon, it is absolutely essential that they maintain a very prolific number of online sellers in their own digital marketplace. This is because a variety of sellers ensure a sufficient increase in the number of products being sold and advertised on Amazon’s website, and therefore lead to a significant rise in the number of potential customers that use Amazon due to the platform’s attractive and ease of usage marketplace.

Having said that, Tobi Lutke – the current CEO of Shopify, has consistently ‘shrugged off’ any concerns relating to Amazon being viewed as a threat or as a competitor. As he brilliantly points out, Shopify in fact does not ‘directly compete’ with Amazon and is in a partnership with the online retailer.

‘Our core business doesn’t directly compete with any one of them, and we are partners with all of them’.

Amazon’s Reaction: To What Extent are the Corporation’s Top Generals Becoming Wary of Shopify

Despite the points mentioned above, accurately determining to what extent Shopify is currently posing a realistic threat to the revolutionary giant platform that is Amazon in 2021 is easier said than done. As briefly touched on above, Luigi Wewege has commented on this unprecedented situation – providing valuable insights.

As Wewege explains, Amazon is undoubtedly being ‘forced’ to become increasingly aware of the potential pragmatic threat posed by Shopify’s growing online eminence and are currently looking into potentially launching a similar product to compete with the aforementioned platform.

However, as he stipulates, Amazon is still relatively early on in the development process of such a commercial move, and there may be some feasibility problems involved as a result of the platform’s robust certification in their market – further discussed below.

‘It is unclear how far the talks have moved, or to what extent the product’s constitution and corporate structure has been determined’, comments Wewege. A likely possibility is that Amazon is currently assessing launching such a similar service to compete with Shopify under their popular Amazon Web Services cloud branch – allowing their e-commerce advisor, Yunyan Wang, to operate the business. This would be an interesting move, as it would in fact have Amazon re-enter into a once unsuccessful market – given the closure of their webstore in 2015.

On other hand, Luigi comments on the likely downside for Amazon of potentially pushing to start a service that’s directly competing with Shopify. As briefly touched on above, he notes that the extent at which Shopify has already solidified themselves in their market is so high that such a move may be ‘pragmatically unfeasible’ in today’s corporate climate.

Regardless, Jeff Bezos – the current CEO and the Founder of Amazon, is undoubtedly becoming increasingly concerned with the e-commerce platform’s proliferation and in fact has recently publicly spoken out about the corporation – categorizing them as a competitor for the very first time in his July letter to the United States House Judiciary Subcommittee on Antitrust, Commercial and Administrative Law.