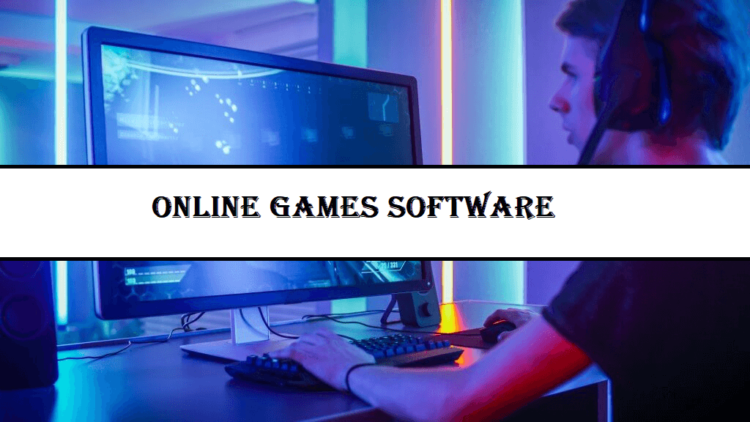 By the end of 2019, the online gaming sector had generated revenues of $120.1 billion. This is according to a report by SuperData, which also showed that Fortnite alone had generated $1.8 billion. The report further showed that mobile games accounted for a majority of the total revenue of $64.4 billion compared to PC games ($29.6 billion) and consoles ($15.4 billion).

The Role of Software in Online Games

Unlike the games you download and install on your computer, online games do not need any installation software. Instead, the games are hosted on a server that all players can access from their individual computers. The idea is to avoid having everyone install the games individually thus allowing everyone to play regardless of the device they have and its capability.

Creating a game requires expertise in game development, but not all online gaming platforms have these experts among their staff. Besides, there is no guarantee that a newly developed game will become popular and worth the effort. Therefore, online gaming platforms choose to provide games that have already become popular. This guarantees that players will find the games they most likely want to play, and also takes care of the development problem.

From the gaming platform’s perspective, this is a win-win situation because all they have to do is create a website. The actual games are hosted on the game developer’s server thus taking the load off them and onto the developer. However, this means that the actual gaming experience depends on the software developer, hence why it’s important for gamers and platforms to choose the game developers carefully.

What Makes a Great Software Provider?

There are numerous developers in the world today, all competing for the same market. However, they are not all the same, and some are much better than others based on the following.

Game developers have only one job to do – make games and ensure they run smoothly on their servers. Because of this, they only need to hire software developers while letting the gaming platforms handle the rest of the interface. For this reason, a developer must constantly work to provide as many games as possible so that players have a variety of games to choose from.

One of the main advantages of online games is that they allow players to connect with each other across the world. Because this is such an essential part of the industry, it is important that the games be of high quality. Nobody wants to play games that are constantly lagging, full of errors, or with any other problems.

As already discussed, game developers don’t offer games directly to players. For this, they partner with gaming platforms such as online casinos, who then connect the players to the developers’ library. Online casinos are especially picky when choosing the developers to partner with because the developers’ stuff reflects on the image of the platform. If, say, a developer’s games are buggy, have a low payout ratio, or do not have great graphics and performance, most players will attribute these problems with the online casino and withdraw their money.

This is why it’s a good sign whenever a developer has a lot of partnerships with online casinos and other gaming platforms.

Which Are The Major Software Providers?

Although there are hundreds of games you can play online, there are only a handful of companies that provide these games. The biggest software providers are those who provide the most popular games, and these are the 3 major companies you probably use every day even without knowing.

There is hardly any online gaming platform today that doesn’t offer one of Microgaming’s titles. That is because Microgaming was the first developer to create online games as early as 1994. As you can imagine, the company has created a lot of games during that time and now has over 1,000 titles in its library.

Microgaming primarily focuses on producing slot games. Some of the major titles in this regard include Jurassic Park, Pharaoh’s Fortune, etc. That being said, the developer also creates casino software that include table games such as blackjack and poker and live casinos.

Over the many years Microgaming has been around, it has built a reputation of being a solid game developer. It provides a huge variety of games and these are all excellently developed to provide an exciting experience.

Several game developers came about after Microgaming’s initial foray and success in online gaming. One of these is Playtech, which was founded in 1999 and is now a major competitor to the pioneer of online gaming. Playtech too has an impressive list of titles and continues to add new titles often to keep players excited.

Most online casinos will partner with Playtech because it offers slot games such as Man of Steel, Magic Seven, Gladiator and lots more. Aside from slot games, you can also find other casino games like roulette, blackjack, poker, Playtech sports and even live dealer games.

Some unique offerings by Playtech include the company’s iPoker network and MoBenga on which players can play bingo. Like Microgaming, these games are also very well developed and responsive to keep anyone interested and excited.

This platform was first founded in 1996, but it waited until 2000 to start offering its software. Now it is as serious a competitor as any of the aforementioned developers, and most online gaming companies include NetEnt’s titles on their platforms.

In the past decade, NetEnt has enjoyed exponential growth as it has been licensed to operate in most countries including the US, UK, Canada, Italy, Denmark, etc. This growth has been fueled by the quality of the developer’s games, of which there are many, and also the attractive payout ratio in its slot games of up to 95%. In fact, this is one of the highest payout ratios in the industry, explaining why nearly all online casinos feature titles from NetEnt.

Choosing the Woodworking in Creating Structure

How to Remove iPhone Classic Ringtone