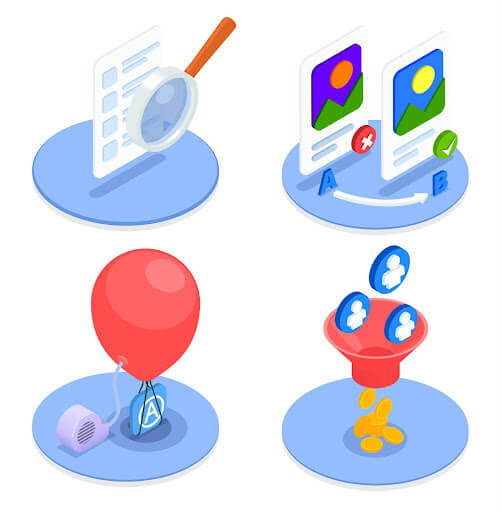 When it comes to marketing, you want to make sure that all of your tricks and methods work effectively. The target audience of each platform, service, and region has its unique characteristics. What works for some users turns out to be useless for others. For you to offer each group what they like, such a marketing tool as split testing is used. This article will define AB testing for promoting mobile games and apps and describe the specifics of this process for each app store.

What Is A/B Testing in ASO?

In ASO, like any other activity, multivariate testing plays an important role. Together with Asolytics, as part of optimizing your app store listings, you can use different versions of your assets to determine which ones attract more customers and give the best conversion. It allows you to evaluate your hypotheses quickly, get to know users, and make proven decisions rather than relying on intuition.

For example, if you do an A/B testing icon, different groups will see diverse versions of your icon for the time you set. When you collect enough responses, you can keep the most effective option. This approach can be applied to various app store assets. The main rule is that all versions used should be equal from a technical point of view. If the quality of one is poor, it will obviously show worse ASO statistics.

The Apple store has been lagging behind Google Play for some time in terms of features and in-house tools provided to developers. Therefore, you previously had to use the Facebook campaign feature for App Store A/B testing. It is easy to set up and use and quite flexible at the same time. However, you had to make allowances because the Apple and Facebook audiences are slightly different.

Starting this year, the Product Page Optimization feature for ASO testing appeared in the App Store, the name of which speaks for itself. It still offers quite limited functionality (for example, you can test only three versions of listings and have a single active session). However, thanks to it, you get complete consistency; that is, the objects you want to evaluate will be displayed everywhere in the marketplace.

The developers will continue improving the AppStore test tool. However, if you need more features than PPO can offer, you can use third-party platforms for now.

Unlike the Apple Store, Google Play has long offered developers its own AB testing app tool. With Google Experiments, you can run up to five tests at the same time and analyze not only graphic elements but also all alternative descriptions. There is even an option to run a global experiment or adjust it depending on the region. All settings and available tools are presented on the Developer Console.

After the set time passes, you can do an app analysis and find out which options were more successful. The Google Play metrics mainly focus on installs and the number of users acquired. You can see the performance of the objects you need on the graph, including the most and least efficient ones, and estimate the increase in attention to your product as a percentage.

Whether you build Android or iOS apps, A/B testing is crucial in getting to the top of the best product lists. It is an important activity that will help you identify the most effective text and visual assets and gain a deeper understanding of your target audience. Thanks to it, you can save money and time by getting objective statistics for all versions of your listings.