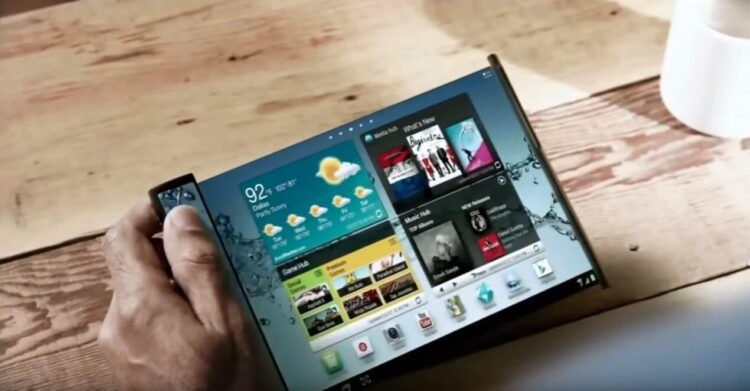 Just when you thought the smartphone market couldn’t get any more exciting, Samsung has dropped a few concept bombshells that look out of this world. This new breath of fresh tech could be just what the stagnant smartphone market has been waiting for.

For some time now, the smartphone market has been struggling to grow leaps and bounds following its past success. Consumers don’t feel the need to upgrade their smartphone as much as they had done in the past simply because, although new handsets are coming out with newer tech, it is not enough to convince consumers. 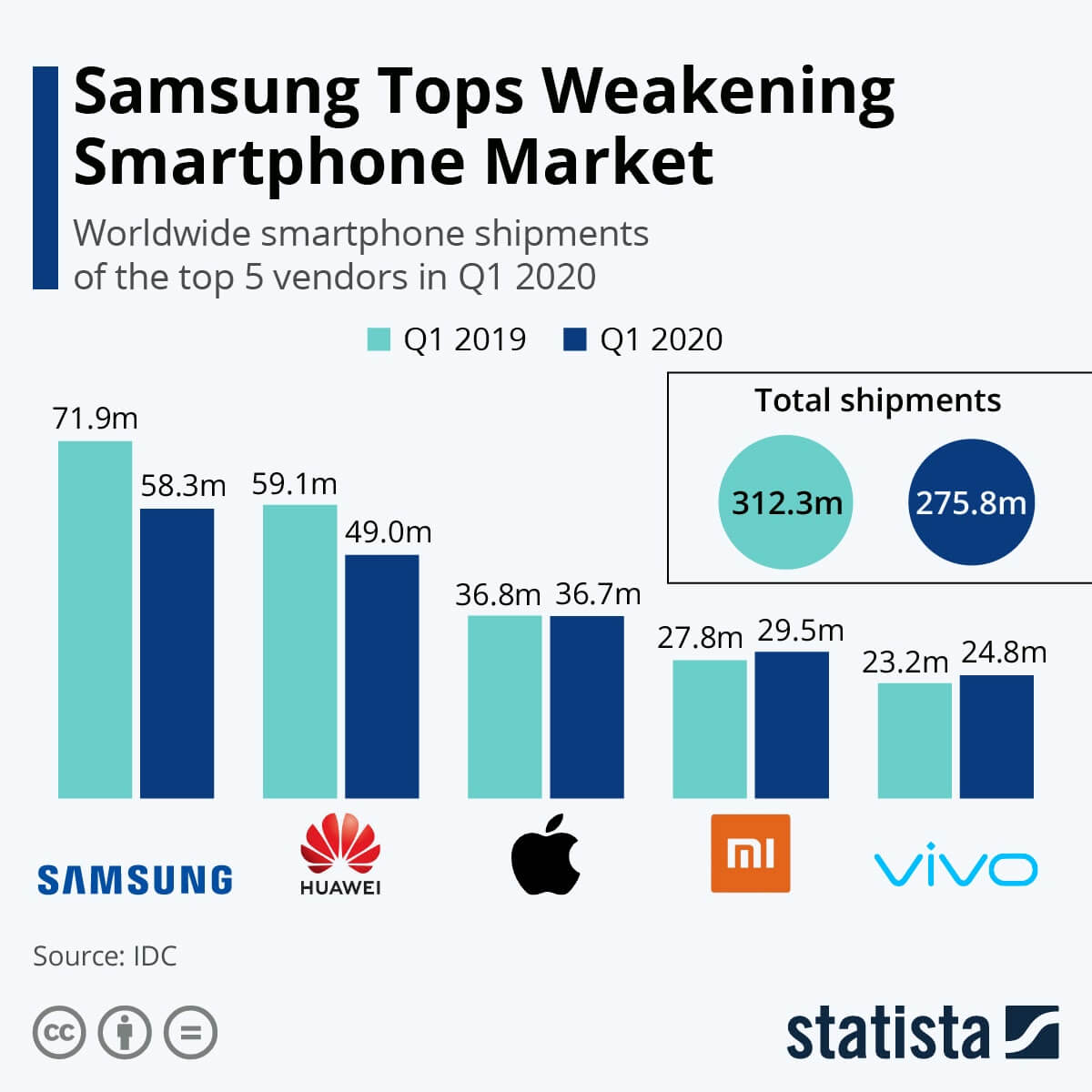 The chart above demonstrates the fall in smartphone shipment across the first quarter of 2019 and the first quarter of 2020. Although it seems Samsung is dominating the market as a whole, their total number of shipments in 2020 compared to 2019 is considerably low. This is typical following the statistics of the past years, which has seen smartphone sales drop year on year.

But the question still remains to be seen if Samsung’s new concept phone and device will be enough to boost the smartphone market as well as introduce new apps? Here’s a look at the concept devices which were shared on Samsung’s official blog.

This first illustration showed a smartphone handset which unfolds to become a rectangular tablet, much like the Galaxy Z Fold. However, the difference between the two is that the new concept phone folds three times, ultimately meaning the device has a larger screen surface area in comparison to the Z Fold, which, according to Smartphone Checker, has a 7.7″ touchscreen. Potentially, the size of the screen of the new three-fold phone could reach as much as 8.5″. 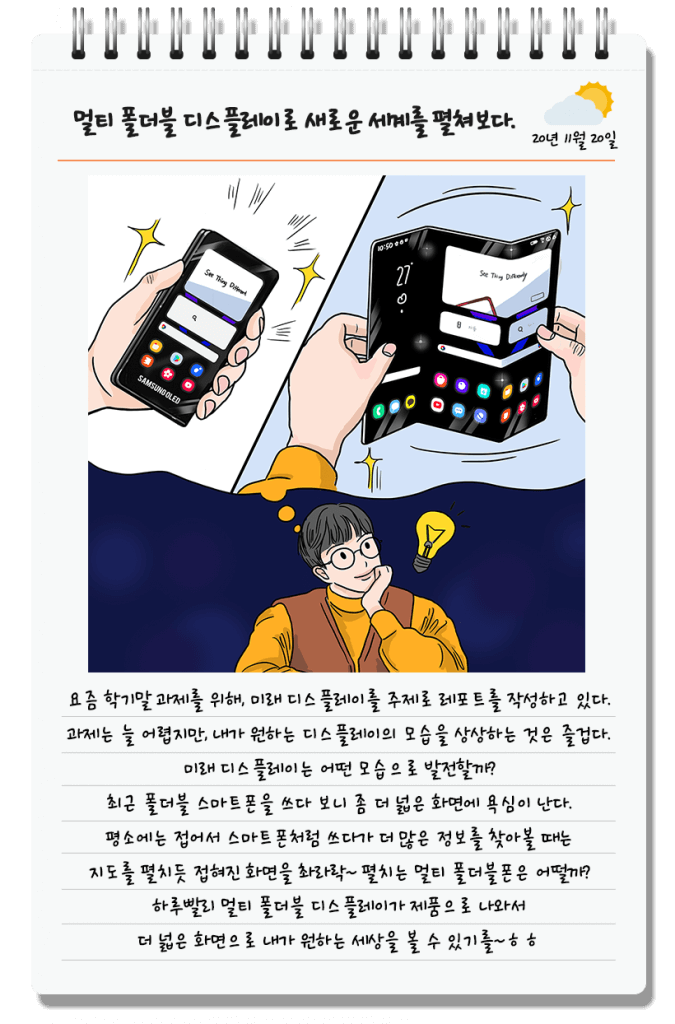 This design would also eliminate the need for a ‘cover display’ which is featured on the Z Fold. The three folds in the device mean the portion of the screen used when the device is folded can also be used when unfolded. This new concept stretched beyond their already revolutionary Z Fold which offered the best of both worlds, a tablet and a phone.

From the sketch provided by Samsung, it is clear the device is just simply pulled and pushed to transition between single and triple screen mode. Their groundbreaking hinge technology, features on the Z Fold has helped to make this possible.

The second illustration to be released showed an even more futuristic design which consists of a screen that rolls out of a tube-like structure tuning into a tablet. There has been much talk about using technology in this way for television screens in small spaces, but this is the first concept to be seen using a folding screen as a table. 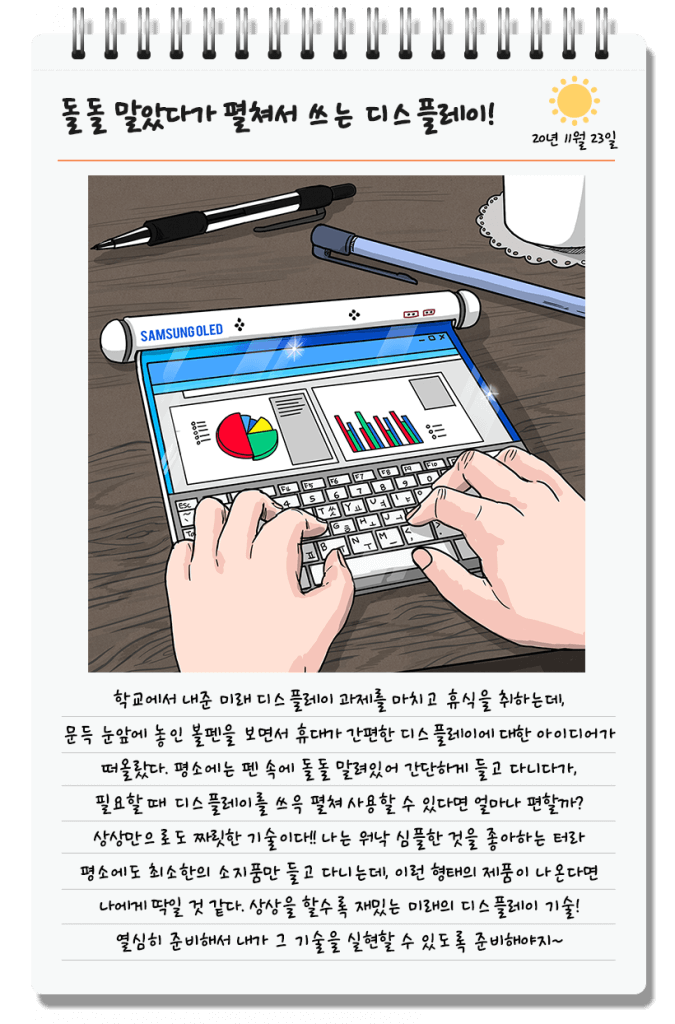 Unlike the first concept, it is still to be seen whether or not this tablet can be used without a support for the screen or if it can only be used while laying down on a hard surface due to its super flexible nature.

A folding tablet like the concept above would make working on the go easier and lighter and could be widely adopted by governmental services such as the police.

What can we expect from future smartphones?

Holograms have been a regular sought after feature present in many different movies and even concerts. For example, the Michela Jackson show in Las Vegas Nevada uses a hologram in some places to represent the late singer. But just how close are we to this technology being featured in our handheld devices for our everyday use?

Holoflex, a prototype device created by researchers from Queen’s University Canada, is a holographic and flexible material which can bend allowing users to view 3D displays from different angles. It also creates a new dimension of images for users to interact with changing gaming on handheld devices totally.

Flexible frame technology could be possible thanks to the use of advancements in flexible screens. However, they should be able to work in a way where users will be able to fold their smartphone in half and twist them around without damaging them. The use for this type of device doesn’t seem obvious or even applicable, but when considering deep-sea diving, their lightweight and playability might just make them popular.

Although there may not be a good enough reason as to why we would need a transparent smartphone, their aesthetics make them look super futuristic and sought after. Considering how transparent they are could also make them impractical as carryout of tasks on it might prove to be difficult, especially if the surface underneath is busy. However, gaining moving forward in technology like this could make a big impact for tablet-sized transparent devices used in the healthcare setting.