The importance of a good sight on your firearm

Whether you are a firearm fanatic, or recently purchased your first gun, an optic will allow you to drastically step up your game. And unlike what you may think, firearm optics don’t have to be expensive. We did the research and listed the best gun sights under $50 here if you’re in need of an affordable sight.

Does a red dot sight make a difference?

In short, most definitely. A study was conducted and showed that a red dot sight tremendously increased target acquisition, as well as accuracy, compared to regular iron sights. 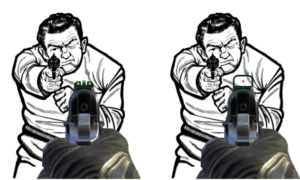 Target acquisition is the detection and identification of the location of a target in sufficient detail to permit the effective employment of discharging your weapon.

With iron sights, you tend to focus on the front sight indicator, leaving the rear sight and target blurry. In high-stress situations, this can cause you to never really acquire the target in your true sight. Rather, you’re simply firing in the general direction of the target.

With a red dot sight, the target acquisition time is little to none. Since the dot is bright red, you can focus on the target, rather than the sight, much like a laser.

During this study, 12 students were given a Glock 17 handgun with iron sights, and one with a red dot sight. They were asked to fire rounds at a human-sized target.

Let’s break down this study for a moment.

These 12 students had no experience with firearms. With iron sights, out of the 291 rounds fired, 171 hit the target or roughly 58%.

With a red dot sight, 262 shots were fired, and 192 landed the target. That’s 73% of shots fired or an immediate improvement of 15%. That may not seem like much, but in reality, that could mean the difference between life and death.

Moving on from hits to critical hits, the iron sight yielded 48 critical hits out of 291 shots fired, that’s 16.5%. Not bad for a student with no shooting experience. But keep in mind, this is in a no-stress environment at a firing range. Imagine this is a violent individual coming at you, and you only have 1 or 2 seconds to spare. That 16.5% of critical hits would most likely dwindle.

For the 262 shots fired with the same firearm, but with a red dot sight, the students landed 134 critical hits. That’s a whopping 51%! While the argument that in a real-life situation, the stress factor will make the same difference, that’s partly true.

Yes, a student would have the same amount of fear with or without sight on their firearm, if a madman was heading their way with the intent to harm them.

But, a red dot sight improves target acquisition as mentioned above. This can and will make a huge difference. That combined with a higher percentage of target hits, and a huge increase in critical hits, there’s no reason not to own a red dot sight.

And, you don’t have to break the bank to get a reliable sight either. Check this list of great firearm sights under $50 to get started. Or, go with my personal favourite for just slightly above $50, the Bushnell TRS-25. It’s a simple yet very effective little red dot. It also provides 11 different lighting levels for the dot, and the lens is fog and waterproof!