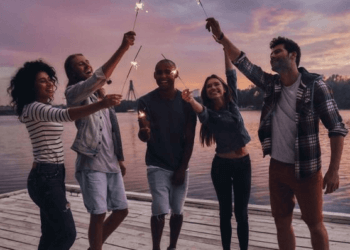 Health, wealth and happiness are the three core pillars of life. Everyone wants to be happy in life, achieve goals and earn wealth and prosperity. But did you ever thought that there are states that can help you in leading a life full of health, wellness and off course happiness? Well, not many of us would have given it a thought but yes it is true. The place/ state you live in is a core factor in determiner how contented life you lead.

The top-rated national moving companies connected with Moving Feedback, a moving service platform known for its excellence in helping customers have successful moving experiences; claim that there are states in America that are known for their happiness and healthiness quotient.

The same has been certified by the Gallup ranking which surveyed over 115,000 adults across the 50states of America and declared the top 10 healthies and happiest city of USA.

So, are you eager to decode the states where you can relocate to embrace the better side of living? Here’s the top 10 happiest cities in America as per the Gallup’s National Health and Well-Being Index:

Hawaii hails to be the happiest city in America in terms of emotional & physical well-being. The state also record the lowest rate of adult depression and stand fifth lowest in terms of divorce rates. Besides these emotional aspects, Hawaii is also known to be a job and income generator. The climate here is also awesome with plenty of days full of sunshine and amazing outdoor life.

Utah is known for a number of reasons and one of which is the quality of life. It is the second happiest state in the United States of America. The workaholic nature of the Utah residents make them very efficient and this is the reason they have to work for the fewest recorded hours in the country. It is the fourth safest state in America and has a very low divorce rate and extremely high volunteer rate.

Minnesota, the incredible state in America is ranked third in the list of emotional & physical well-being. In terms of work environment, the state is ranked sixth in the country. With second highest volunteer rate, third lowest divorce rate and the safest state in America, Minnesota makes a perfect state to move to and enjoy a healthy and wealthy life. The residents of the state are known to be very warm and friendly in nature.

California is not only rated as the fourth happiest state in America but it is also ranked third for sports participation and fifth for lowest suicide rate. The city’s incredible life is also because of its amazing weather as majority of the city enjoys a mild weather throughout the year.

Although the state is ranked as the fifth happiest state, it is ranked second for emotional & physical well-being. The suicide rate in New Jersey is second lowest in the country and the divorce rate is fourth-lowest. The only shortcoming of New Jersey is that the city has recorded the second-highest long-term unemployment rate.

The state not only secures the sixth ranking in the happiest state list, but it is also known for having the best community, environment and work environment. The reason behind the great mood of the Idaho residents is claimed to be the high rate of sleep this state records.

Ranked third for work environment and eighth for emotional and physical well-being, Massachusetts stands tall at the seventh rank of the list. The state is known for third-lowest suicide rate ad fourth in terms of work hours. The people here are highly educated and great achievers.

The state is great for you to start a new life as the rate of emotional & physical well-being is great ere and the state records a very low suicide rate. The only glitch is that Maryland records fifth-highest long-term unemployment rate in America.

The ninth place in the list goes to Nebraska. From friendly locals to amazing outdoor landscapes and natural wonders, Nebraska has a lot to offer. The life here is slow but steady and this is the key reason why people here enjoy lower stress and anxiety levels.

Connecticut is the 10th happiest state in America but in terms of emotional & physical well-being it secures the sixth rank. The suicide rate in the city is sixth lowest and it is on the fifth place in terms of safety.

If you are planning to relocate, these 10 cities welcome you with open arms. You can enjoy great life opportunities, amazing community and a life free from stress and anxiety. If you are ready for such a transition, start searching for the USA top-rated long distance moving companiesand get started.