The Mercenary Guide for Diablo 2: Resurrected: Which Merc Should You Pick for Your Build 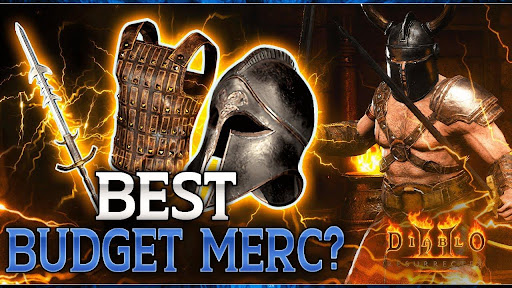 This page provides information about mercenaries in Diablo 2 Resurrected, such as where you can recruit them, what abilities they possess, and what equipment you should give them.

Act 1: Kashya Mercenaries are non-playable characters that are available for hire and will travel with you on your adventures. Despite the fact that their AI is, at best, questionable, they are an essential component of the gameplay and, one might even venture to say, the D2R Solo build, as they contribute in a variety of ways that are helpful. You can acquire different mercenaries from various non-playable characters (NPCs) in the following acts:

It goes without saying that hiring a mercenary will cost you gold. Additionally, the newly hired mercenary will replace the previous one, so make sure to remove any equipment from the previous mercenaries before you hire a new one. The mercenaries that are available for hire will roughly scale to the player’s level but will never exceed it. Additionally, as they travel with you on your journey, they will earn experience points. In the event that one of your mercenaries perishes, all you have to do is go back to any of the Mercenary Captains in each act (or to Tyrael in Act 4), and they will resurrect your mercenary as if they were brand new—for a price, of course. A mercenary who is in poor health is an expensive liability.

One of the most obvious uses for mercenaries is as a distraction for the enemy. Despite this, casters will find a well-equipped mercenary tank to be an invaluable asset for drawing enemy fire and bundling up multiple enemies into a single target for easier elimination. The best candidates for this part are mercenaries from Acts 2 and 5, respectively. Even though their offense is notoriously unreliable (it is an exercise in futility to try to convince them to attack what it is you specifically want them to), when properly armed they are capable of dealing a significant amount of damage. It is possible for an Act 2 Mercenary to achieve a damage-per-hit rating greater than 5,000 if they are armed with an ethereal elite polearm and have their own Might aura active.

This deal a significant amount of damage to almost all of your opponents, but it is especially helpful if your character is unable to deal physical damage in any other way.

Mercenaries are the final type of support that can be utilized by players for their abilities. Act 1 mercenaries will use an ability called Inner Sight to lower the Defense of their enemies. Act 2 mercenaries will have the ability to provide a variety of auras, such as Blessed Aim, Defiance, Holy Freeze, Might, Prayer, and Thorns. Even though they do not have any abilities of their own, mercenaries can still equip themselves with gear that grants boons such as Insight and Infinity.

Therefore, choosing the right mercenaries to hire and providing them with the appropriate equipment can have a significant effect on the player’s overall performance. The resistances of a mercenary will improve as they level up, but gear boosts will continue to be beneficial to them regardless of their level. In the Hell difficulty, their native resistances won’t even come close to reaching 60 even when they’re levels 90 or higher. Other aspects, such as Attack Speed, damage, and Damage Reduction all play supporting roles in the overall game.

Mercenaries are able to equip a variety of D2R ladder items, the specifics of which change depending on the type of mercenary you have; however, they are always able to equip at least some form of armor, a helmet, and a weapon. You are going to have to make due with the limited space in your inventory. In certain circumstances, ethereal equipment is specifically sought after, particularly in the case of runeword weapons that are designed to be used by mercenaries. If you choose the second option, you will be required to provide the mercenary with the Faith runeword bow. This is widely considered to be the most beneficial use of a companion of this kind, but only if you have the financial means to do so. For what it’s worth, they also have access to the ability Inner Sight, which lowers the Defense of nearby enemies. It does not matter which variety they use, their elemental arrows will not significantly contribute to the damage. Having said that, as long as she has the necessary supplies, she can make a significant contribution from a distance.

Act 2 mercenaries have a lot going for them, which is probably why they are hired more frequently than any other kind of mercenary. Because there is no way to alter a mercenary’s aura and there can only be one for each individual, it is important to hire the mercenary that possesses the aura that you desire.

In addition to all of that, Act 2 mercenaries are relatively robust, which makes them excellent tanks. If you equip as much Leech, Attack Speed, and Resistances as you possibly can, along with the best polearm you can find, you will have a formidable companion accompanying you throughout your journey.


Iron Wolf, the Mercenary from Act 3

The Iron Wolves are the only mage mercenaries available in the game, and they are similar to the Sorcerer from Diablo 1.

Because you have virtually no control over them in combat, as is the case with all mercenaries, they will cast whatever spell pleases them in the moment, which may or may not be the spell you need them to be casting. Because their spells have the ability to freeze foes, cold mercenaries are highly sought after. This is especially true when one considers that the damage output of all of these mercenaries, regardless of element, is relatively low.

Items that increase leech and attack speed are not as important for Act 3 mercenaries because they rarely attack with their weapons. As a result, these types of Diablo 2 items should be deprioritized in favor of items that increase survivability (resistance, damage reduction, and life) and items that benefit casters (+skills). These mercenaries would do well to equip themselves with spirit swords and shields as their midtier weapons.

Their preference for attacks from a distance makes them poor candidates for the role of tank. They also have access to the Barbarian skills Bash and Stun, which they can use. I’m afraid that this can’t really compete with the auras that the Act 2 mercenaries provide. However, if you have an ungodly amount of money, you can create the Last Wish runeword. This runeword will grant this mercenary and nearby allies an sLv17 Might aura, which is something the Act 2 mercenary can accomplish in a manner that is significantly more cost-effective.