THE STREET FOOD OF POMPEII

A Nereid riding a seahorse, clearly visible as a decoration of the bench, attracted the attention of potential customers of the diner that was located in the small square of Pompeii: there it was possible to find drinks and hot food to have lunch out of the house without any problem.

This is the latest and most important discovery that has emerged from the excavation of the Regio V of Pompeii, which was buried by the eruption of the volcano Vesuvius in 79 AD. In the Roman cities, these diners, very similar to our street food, which the Romans called with the Greek word “thermopolium“, were very common: you can visit one, in an excellent state of preservation, even within the Archaeological Park of Ostia Antica, just outside Rome. 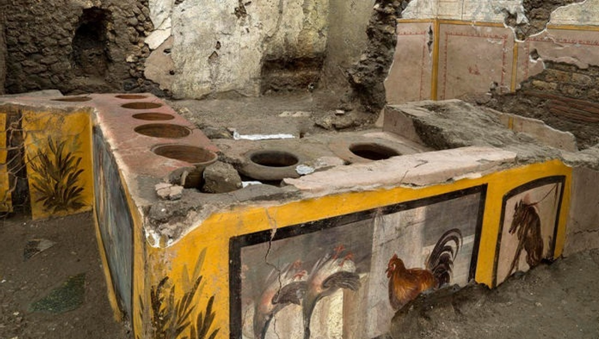 We talk about it with Vincenzo Spina, Roman Tour Guide and President of Rome Guides, a Cultural Association that organizes guided tours in Rome. “This is an exceptional discovery. The site is not new, having already been partially excavated in 2019, but in 2020 the excavations continued bringing to light not only the bench, but also other rich decorations of still life, findings of food remains, animal bones and victims of the eruption“. In front of the thermopolium, indeed, had already emerged a cistern, a fountain and a piezometric tower for the distribution of water.

THE DECORATIONS OF THE THERMOPOLIUM

“The absolute importance of this discovery is in the decorative layout. The thermopolium of Ostia Antica is structurally in perfect condition, but at the level of ornamental decoration it is much poorer. The one in Pompeii, on the other hand, is amazing!” says Vincenzo. The decorations on the bench present the image of a Nereid on horseback in a marine environment and, on the shorter side, the illustration of the same diner as if it was a commercial sign: the discovery, at the time of the excavation, of amphorae placed in front of the bench reflected the painted image. 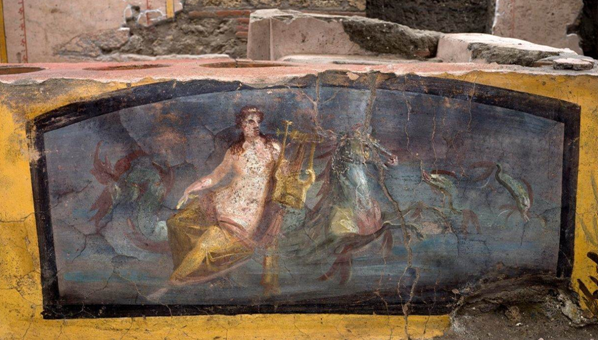 In this new phase of excavation, on the last part of the bench other valuable still life scenes have emerged, with representations of animals, probably slaughtered and sold in the shop. Bone fragments, belonging to the same animals, were also found inside containers built into the thickness of the bench containing food for sale. Two ducks exposed upside down appeared too, ready to be prepared and eaten, a rooster and a dog on a leash, which, according to Vincenzo, “could be a sort of graphic representation of the famous Latin phrase Cave Canem, that means Beware of the dog!“.

As evidence of how these animals undoubtedly represented the dishes consumed in the restaurant, inside the containers were found remains of ducks, pigs, fish and snails, which demonstrate the great variety of animal products used in the preparation of the meals.

The most curious discovery concerns the ironic inscription “Niciacineadecacator“, which can be read on the frame enclosing the painting of the dog: Nicia (probably a freedman coming from Greece) defecator and homosexual. Probably this Nicia was one of the attendants of this thermopolium who had some enemies.

THE DISCOVERY OF THE BONES

Another interesting fact is the discovery of human bones: some are pertinent to a man of about 50 years, which probably at the time of the arrival of the flow of pyroclastic was positioned on a bed, as evidenced by the nails and residues of wood found below the body.

In the corner between the two doors of the thermopolium was also found a complete skeleton of a dog: it was not large and muscular as the one painted on the counter, but very small, about 25 centimeters high, like a small pet.

The material found in this extraordinary discovery is as important as the pictorial decoration.

The floor, in good condition, consists of a layer of cocciopesto (a waterproof covering composed of terracotta fragments), in which in some places fragments of polychrome marble have been inserted. On it were found nine amphorae, a bronze patera, two flasks and a ceramic olla. The remains found in the dolia (terracotta containers) of the counter, once analyzed in the laboratory, will represent exceptional data to understand what was sold in the Roman Empire of the I Century AD and which was the food diet.

Oblige yourself with worthy item

Understanding and Using the Online Pharmacy

What is a Power of Attorney and when might I need it?

How to Properly Clean a Gun: All the Steps Explained

How To Keep Your Home Office Junk-free

Electrolysis vs Laser Hair Removal and other questions

5 of the Most Common Dental Emergencies and What to Do

Problems with having a motorbike and MOT is needed

Cold Hard Cash: What Affects the Value of the Dollar?

Best Online shops you can trust for shopping in the UK

Organizations have the wrong idea about Multi-factor Authentication