The Wakizashi Sword Vs The Katana Sword

by Ellen
in Business, Gadget, How to, Tech
Reading Time: 2 mins read
0 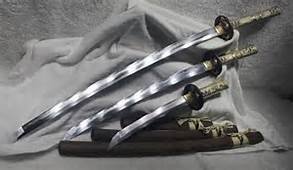 Two of the most famous weapons that hail from feudal Japan are the wakizashi sword and the katana sword. They both came into existence after the use of the smaller size tanto sword became popular. Although these two weapons are very similar, they are also different in some respects.

The katana sword is older

The katana sword came before the wakizashi sword, with it dating back to as early as 1185 AD. It was during this period that swords started to be made much stronger and longer in order to  combat against the leather made armor that was used by Mongol soldiers that were invading Japanese lands. Due to the strong carbon steel, curved blade, and the fact that it was carried by samurai with the cutting edge pointing upwards, the Japanese were able to successfully defend their territory from the Mongols.

The Wakizashi sword was used, at its earliest, during the fifthteenth century, meaning that it is some several hundred years younger than what the katana sword is.

The katana sword is longer

The main difference between the katana sword and wakizashi sword is their length. Even though there are some exceptions to this rule, the vast majority of wakizashi swords have a blade on them that measures anywhere between 30 cm and 60 cm (12 inches and 24 inches), this is in comparison to the blade on the katana sword that measures between 60 cm to 73 cm (24 inches to 28 inches).

The wakizashi sword acted as a backup

Something else that differentiates the two weapons from one another is the manner in which they were used. It was part of the law within feudal Japan that a samurai soldier had to have two seperate swords on their person at all times. This law was called ‘daisho’. These two swords consisted of a main sword and a backup one.

It was the katana sword that was used as the main one and the wakizashi was the backup one. Carrying both of these two separate swords garnered a certain level of respect for samurai soldiers.

Similarities between the swords

Other than the relatively minor things that were mentioned above, the katana sword and the wakizashi sword were not that different from one another. For instance, they both had a solitary, slightly curved edge, and were both made of the best quality carbon steel. Additionally, they both made use of similar mountings. They both had the potential to cause serious harm to an adversary.