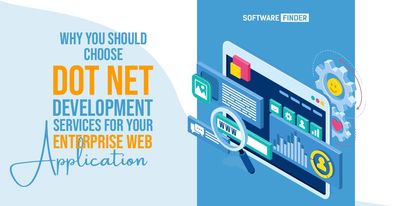 ASP.NET includes the perfect combination of web development tools that can help businesses create robust enterprise applications. Web developers have many options available to build the website framework but dot net development services remain their top choice. ASP.NET offers the methodology and expertise which makes it an ideal preference for most development teams. Even though the framework has only been around for over a decade, it has made many advancements and seen many updates in a short period.

ASP.NET Core is a robust framework with many features which makes it the popular choice for web developers. The MVC 6 version of ASP.NET has distinct characteristics and it is used to develop applications that keep applications running smoothly on a Windows platform. ASP.NET Core is a complete overhaul of the system and it has architectural changes that are in line with present-day development practices.

These changes have made the dot net development framework a sleek and modular choice for web applications. It has an open-source cross-platform development architecture that can be utilized for deployment on the cloud or on-site.

ASP.NET Core provides many advantages and extended utility to web developers. The Core structure makes life easier for the development team because it has less-demanding requirements. The process of developing APIs is super quick with the versatile backend support dot net development services can provide for web applications.

ASP.NET Core is the ideal choice for enterprise web development for the following reasons.

Previously developers had to stress over every little thing down to the errors when developing an enterprise solution. MVC makes web app development a breeze because of the progressively straightforward process. It follows an extremely productive approach and the recent changes in the framework additionally help with creating web APIs.

It is also easier to test web applications using dot net development services because it offers a better way of accomplishing goals. Developers can divide their concerns into smaller objectives which takes the pressure off of designers. They no longer have to code, assemble and test applications using multiple models, views, or controllers.

A component of ASP.NET is razor pages which simplify programming and makes it specific to the webpage situation. The coding model is page-based and simplifies the web user interface building procedure. Web developers who have prior experience working with an MVC framework will be familiar with the controller classes. They are powerful tools and come loaded with a large number of actions.

The list continues to expand as new things are added to the framework. There are continuous and frequent updates that facilitate web development. Razor pages help a dot net web development company design an independent page for their web app with a dedicated View segment. Managing code is also much easier with this solution.

The new .NET Core framework provides built-in support and has more capabilities than the ASP.NET version. It is compatible with mainstream JavaScript frameworks like React, Agular, and Aurelia. The new ASP.NET Core has JS services that lay down the foundation for developers. They can use it to create user-facing applications and utilize the supported JavaScript framework for them.

The purpose of including JavaScript Services in the dot net development services framework is to get rid of hidden pipelines and allow developers to start coding for their applications much faster. It is now possible for teams to create feature-heavy web applications with complete front-end development.

ASP.NET Core offers a cross-platform architecture which means the applications built on this framework can run on all operating systems such as Windows, Mac OS, and Linux. A dot net web development company can choose which OS they will be creating their application on before they begin the project.

This means developers have the option to work with Linux, Windows, or Mac OS without limiting their ability to collaborate on the project. This is possible because the Visual Studio IDE provides a consolidated experience to all developers. The ASP.NET Core framework gives users the ability to develop and run their web applications on the operating system of their choice.

Before dot net development services, developers had to utilize a third-party tool to utilize dependency injections in their applications. ASP.NET has solved this problem by providing top-of-the-line tools. The development team is not limited to only web applications. They can use their new libraries to create event-driven exercises and implement them in applications such as AWS Azure and Lambda.

Dependency injections are a part of dot net development and they improve the testing ability of developers. They also facilitate the scalability of web applications which is critical to enterprise solutions for companies that are targeting growth.

ASP.NET Core is the latest addition to dot net development services and it indicates a new beginning for enterprise-level applications. The web app development movement is gaining momentum and with .NET it can achieve new heights. The framework brings consistent improvements and highlights the importance of having a robust solution.

A web developer that works with ASP.NET will be under less stress and able to create robust solutions with simpler coding. The enterprise web applications are essential for creating a stronger digital presence for the company. Using ASP.NET Core is the best decision a development team can make for the organization and it can help create a web application that fulfills all the requirements of a growing business.