How does An Air Hockey Table Work 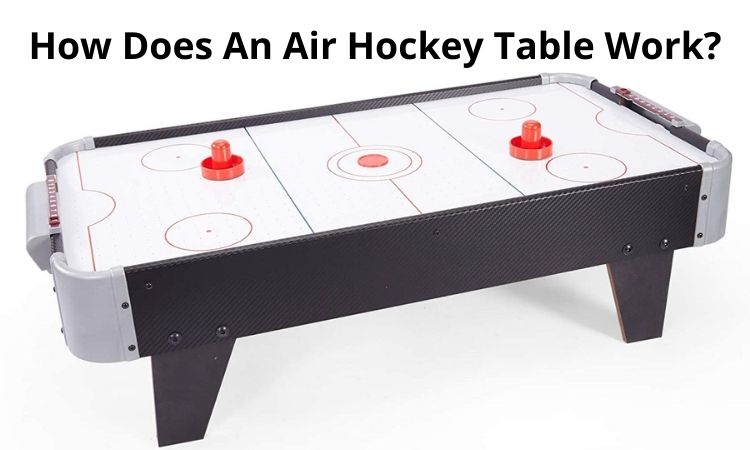 When people talk about home games rooms and dens, typically the first images that spring to mind are likely to be a nicely stocked bar in the corner, a few comfy chairs and a lounge to relax in with mates and enjoy the game on a big-screen TV. In the center of the room, you’ll very likely picture a nicely polished pool or billiard table.

It may come as a surprise to many that air hockey has been around for almost four decades now. Some may know the game from amusement arcades and pinball parlors, but the air hockey game has found its way into people’s homes since its invention in the 1970s, and in many cases it takes the place of that traditional billiard table.

For the novice and the uninitiated – what is air hockey all about, and how exactly does an air hockey table work?

The first geeky fact about the game of air hockey is that it was actually invented by engineers in the 1970s. As strange as this may sound, when compared with the pool table, which dates back to around 1765, the air hockey table is actually a very recent newcomer to the range of leisure table games. For the record, the first coin-operated billiard table was patented way back in 1903.

For people who are unfamiliar with the game, check out Air Hockey Geek the best air hockey table source online. As a word of caution – this is possibly one of the most addictive table games on the planet!

How the Air Hockey Table Works

The operating principle of the air hockey is fairly simple. The table surface is glassy smooth, to minimize friction, and the entire playing surface has rows of finely drilled holes. Driven by in-built fans, air is pumped up through the table, creating a cushion of air that causes the plastic puck to hover or float.

As a second geeky fact – this is the same principle as a hovercraft. This basic science principle – a smooth frictionless surface, with a metered air supply to create an air cushion – translates into a game that is simply exhilarating and downright fun

The Fast And The Furious

Because the puck can travel at speed, the game of air hockey can potentially be played extremely fast and becomes a hotly competitive affair. Similar to a tennis game, air hockey tables can accommodate two to four players, and it would be fair to say it has an appeal for players of all ages and fitness levels.

When you consider that there are now professional air hockey leagues and tournaments, the sense of competition and sport is obvious.

Many people recall the air hockey game from amusement arcades, and remember a few games with friends. Since those days, air hockey has come into its own as a leisure game rivaling pool or billiards. Air hockey table has a place in the home games room or den.

Perhaps it’s time to hit the