Is it illegal to Fake Your Death? Here’s What You Must Know! 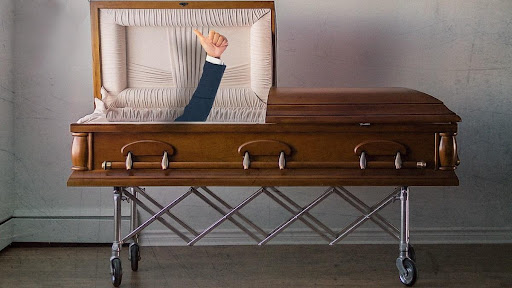 When it comes to “faking one’s own death,” the practice has been around for hundreds of years. There are a variety of reasons why and how someone would seek to commit this form of fraud. It’s possible to understand some of the reasons behind this, but it’s impossible to understand others.

It’s very uncommon for those attempting pseudocide to be ignorant of the possible repercussions of their acts and the best ways to plan and execute their schemes effectively. A wide range of people, from average residents and prominent writers to the people in the corporate hierarchy, try this facade. But, is it illegal to fake your death? Let us shed some light on it through Law and relevant examples.

Faking Your Death: Is it Illegal?

Do you ponder is it illegal to fake your death? The simple answer is “No”. Though pseudocide (Faking your death) is not a crime but it may be linked to fraudulent activities which are then dealt with strictly by the Law.

If a person is reported to fake his / her death, he or she might be involved in:

Why Do People Fake Their Death?

Is it possible to alter one’s identity and leave behind a miserable existence? To avoid being punished for a crime? To express feelings of love? Perhaps it’s a way to get out of a bad personal situation? Yes, that’s exactly what I meant. A person’s death may be staged for any of the following reasons: Other explanations exist, some of which can lead one to doubt the offenders’ reasoning or mental health, or to compare their antics to immature pranks rather than fraud, but these are the most common ones. The top two concerns are financial difficulties and avoiding prison.

To pay off their €130,000 mortgage, John Darwin and Anne, his wife, had hoped to utilize his life insurance policy (approximately $144,000). To do this, the pair faked a canoeing mishap in which Darwin supposedly went missing. The insurance company only paid Anne half of the insured amount since his corpse was never recovered. “Aren’t you supposed to be dead?” a renter questioned Darwin when he returned to the couple’s house after living in a single room apartment next door. However, four years later, a picture of Darwin and his family shot in Panama appeared on the Internet and in one of Britain’s most popular dailies, Daily Mail. The Darwins were sentenced to six and a half years in jail for various charges of fraud and deceit after Anne Darwin admitted that John was the guy in the photograph.

Pseudocide never crossed Elizabeth Greenwood’s mind when she was considering how to avoid repaying her school debts until a friend suggested that she fake her own death and go to a white-sand beach in the Caribbean. The plan grew increasingly enticing to her as she struggled with the burdens of debt and the demands of daily living.

She traveled to the Philippines to get a fake death certificate saying that she had died in a “vehicle accident” after spending countless hours on the Internet. Greenwood understood that she “didn’t want to leap” when she had in her hands what looked to be actual, credible, and stunning evidence of her death. This encounter, however, piqued her interest in the concept of the deed rather than the act itself, which prompted her to investigate further and interview those who had really carried out their fraudulent scheme and others who might assist “make it happen” – for a fee.

A former fund manager, Samuel Israel III, who led a $450 million Ponzi scam, is a prime example of a white-collar fraudster who is incarcerated. “Suicide Is Painless” was scrawled in the dust on Israel’s SUV when he failed to show up for his twenty-years sentence, prompting authorities to conduct a search. Authorities were doubtful with a lack of witnesses and the discovery of no corpse in the river. Police were surprised to find that he had informed his spouse that morning that he was going into prison (by driving himself there).

It was only after seeing his photo on the list of America’s Most Wanted that he decided to turn himself in. Bernie Madoff’s colleague Ponzi schemer Bernie Israel is now serving 14 years of a 22-year jail term, which was increased by two years when he was convicted of bail-jumping.

Timothy Dexter, a rich and self-proclaimed “Lord” of the eighteenth century, was rejected by his contemporaries due to his illiteracy, and peculiarities, which left him with a wounded ego and sentiments of disdain. An intricate scheme to commit pseudo-death was devised by Dexter in order to find out whether his peers’ hatred was reflected by the public. Among those in attendance were his family members, who were all involved in the fraud. Six years later, he died in a genuine hospital, never having received the acclaim he deserved.

When it comes to proposing to his lover Alexey Bykov, he went all out and faked his own death in order to do it. Staged an automobile accident with a bleeding Bykov laying on the road with the aid of an actor, director and make-up artist. “Paramedics” informed his girlfriend that he was dead when she got on the scene, and she started weeping. That was Bykov’s signal to reappear from the dead and propose to her with flowers and balloons. “Realize how empty your life would be without me,” he claimed of his unconventional declaration of love. She accepted his proposal, which surprised her, but not before she vented her frustrations. “I was so enraged, I was close to killing him once again, but this time I meant it.”

Tags: Is it illegal to Fake Your Death