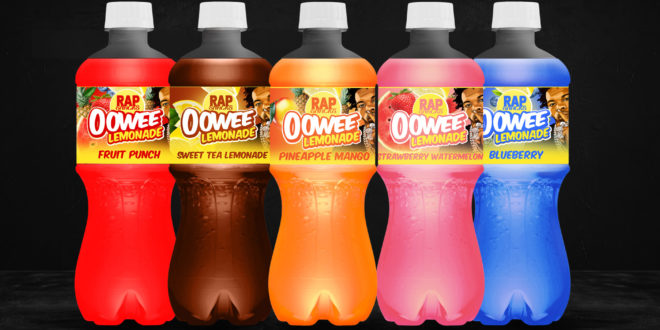 Jai Manselle, the entrepreneur and designer responsible for creating the look of the extensive Rap Snacks product lineup, has taken a fresh, clean approach to the look of their new offering. Rap music superstar Lil Baby will act as the pitchman for this latest release. He joins other popular artists of the day like Cardi B and Migos who also sell their own Rap Snacks products.

Oowee Lemonade will come in five flavors: fruit punch, strawberry watermelon, mango pineapple, blueberry, and sweet tea lemonade. The product will be available nationally where Rap Snacks products are sold (likely in stores like Walmart and Sav-A-Lot). The announcement was made jointly on the social media accounts of Li Baby, Rap Snacks, Manselle, company CEO James Lindsay and outspoken investor Percy “Master P” Miller following Baby’s much talked about performance at the 2021 Grammys.

In a post on his Instagram, Manselle said “Entrepreneurship is a part of our culture. It’s a part of our DNA. This Rap Snacks brand has never just about creating a business for ourselves, it’s also about inspiring others to do the same.” He later continued with “…a lot of our first businesses were lemonade stands, so what better way to inspire the next generation of entrepreneurs?”

Manselle has a long history of bringing out the inner entrepreneur in his celebrity partners. He was formerly the Cheif Strategist for the Big3 basketball league that was founded by movie and music star Ice Cube. Big3 is a professional 3-on-3 league featuring former NBA players that airs on CBS sports.  He also owns companies with both Allen Iverson and Tracy McGrady.

Through Rap Snacks’ BossUp Foundation, an organization “formed for charitable, educational, and scientific purposes,” a percentage of profits will go to Atlanta Children’s Center and Covenant House, as chosen by BossUp and Lil Baby.

Stylized as Bo$$-Up, “the program intends to offer high school (9-12 grade) students a safe, healthy, caring, and enriching environment, by engaging students with long-term, structured learning in partnership with teachers, parents, local businesses, and their communities.”

“It’s life-changing,” Lil Baby says. “I’ve never been a part of anything like this before.”

In addition to the lemonade release, they also express plans to launch a new energy drink called “Turn Up.”