Know What You Eat Before You Eat It! 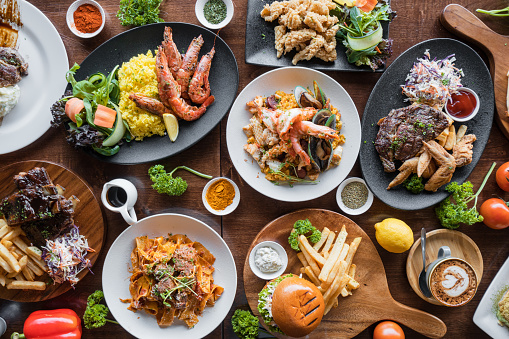 Top looking down at restaurant food spread on table.

Has something in your life got you thinking about your diet? Maybe, your primary care physician handed you a diagnosis that turned out to be life-altering. Maybe, you have been turned on to food because countries across the globe are now facing supply shortages. Whatever the case might be, food is essential for every aspect of life. Without it, humans would not survive more than 21 days. There is absolutely nothing wrong with wanting to know more about what is on your plate. You only have one body, so why not protect it as long as possible.

Have you ever considered where food comes from? It comes from various sources, but mostly from commercial farming. Humans have been farming since the beginning of time. Some 13.78 billion years ago, microbes survived on carbon, hydrogen, oxygen, potassium, and phosphorus. When the earth become oxygenated, microbes evolved into sponges “Poriferans.” Sponges survived on a diet of bacteria, plankton, and viruses.

Following sponges, other seafloor creatures evolved. Arthropods, mollusks, and annelids, followed by dinosaurs, primates, and eventually humans. When you consider evolution, it would not have been possible without food.

Is It A Fruit Or Vegetable?

Have you ever wondered what type of food is on your plate? Imagine a freshly cut avocado lying on your plate. Is this a fruit or vegetable? Fruit is developed through a process known as “fertilization.” The process occurs takes place inside the ovary when a pollen grain sperm cell integrates with an egg. Through fertilization, a tiny seed is developed inside the ovary. The seed eventually transitions into a fruit.

Fruit production would be virtually impossible without a process known as “pollination.” Now, ask yourself if an avocado is a fruit or vegetable? It is a fruit.

Where Does Your Food Derive From?

Food derives from commercial farming worldwide. Peas, onions, cabbage, carrots, clover, cocoa beans, figs, lentils, and olives originate from farmers in the South and East Mediterranean. Strawberries, carrots, beans, and potatoes originate from the Andes. Most food sources are based in Asia.

As food supplies are dwindling, governments are considering new technology to boost production. A controversial topic, regarding food production is known as Genetically Modified Organism “GMO.” Some members of the medical community are pushing back against GMOs. The process utilizes genetic engineering methods to speed up the production of food. In other words, the DNA of targeted animals and plants is altered utilizing genetic engineering processes.

Evidence shows that animals that consumed GM food presented with serious health conditions. Accelerated aging, immune dysregulation, and infertility are just to name a few. This is just one reason why it is crucial to know where your food comes from.

Tags: Are pickles a fruit