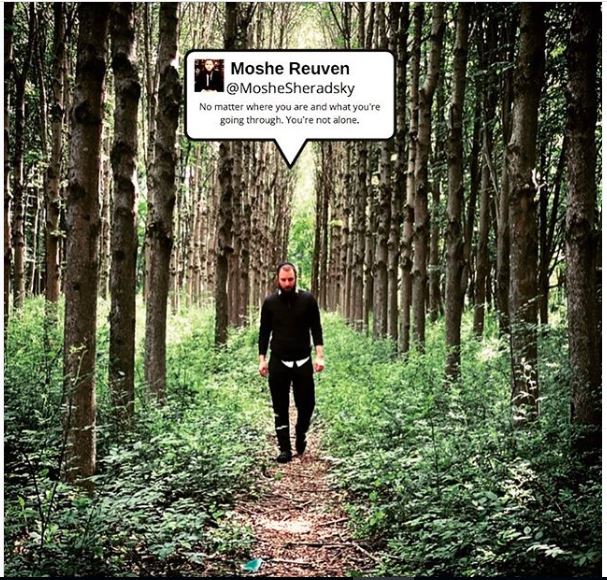 Sitting with a stare of wisdom on his face, a black hat, chassidic robes, and a swagger like I’ve never seen, this 20 something year old Rabbi awaits my next question with a look on his face like he has already lived a thousand years. (As he sits) Located in a private location in the woods of Northern New Jersey wealthy class, Moshe Reuven, lives what seems to be a discrete life, while overseeing very advanced operations. He’s the only Rabbi I’ve ever heard of with over a million followers, and while he does maintain a very strict study schedule throughout his day, he also runs several companies, building a technology that is going to actively work to advance society to a different era altogether.

“What’s your biggest fear?” I ask as I ponder more deeply about how a lot of people are only just finding out about him. “I fear G-d.” he says, almost as if that was the end of his answer, and then he continues on, “.. as a Chassidic Jew, I consider myself a follower of the Founder of the Chassidic movement, Rabbi Yisrael Bal Shem, also known as the Bal Shem Tov. His father passed away when he was very very young, and his last words to him were to love every person as he loves himself and to not fear anything except for G-d Himself. I’m a human being, so by nature I have things that cause me to feel fear, but as I’ve gotten older my realest human fears are mainly, not fulfilling my purpose or potential on earth, things beyond my control, like the actions of others that may impede me fulfilling my potential or purpose, G-d forbid. Yet, I believe these things are all in the hands of G-d, which falls into the category of my initial response.”

Moshe’s main company, Wedu, is a mixture of a tech company and a media agency. He’s sat on the Advisory Board of The University of South Florida for several years, having joined while he was still in college at their rival school, UCF, as well as on Forbes’ Technology Council in 2018 & 2019. I sat down with Moshe to understand more about his journey and see if we can learn from his success.

Q: When did you start Wedu?

A: I started Wedu when I was still in University. At the time my university was investing heavily into the Startup aspect of business and I was very eager to work on a venture or two. I started writing the business plan and bringing on friends I had in the tech industry. I figured if anything it would just enhance my studies in the Business School to do so. Before I knew it the University gave us an entire section of the Business building as office space, part of their Upstarts Incubator directed by a Professor named Mike Pape, who sold his company to Pfizer for about $2B and now is a VC. He ended up becoming a highly influential mentor of mine. A couple friends of mine were helping me manage a 50+ person organization while we completed our classes in our respective programs.

Q: Being a young college student at that time, did you know you’d receive so much acclaim in Business and as an Influencer?

You know, things like writing for Forbes, although one day being in Forbes Magazine appealed to me, it hadn’t crossed my mind that I’d end up writing for them. If it did, I wasn’t imagining it would be so soon. I do recall, one day in my dorm room reading Forbes Magazine and thinking maybe I’d write such a piece one day. Overall, if anything, I did think we would be much further along by now. When you’re really young you imagine things happen much quicker than they usually do. I did think it would be likely that I’d have a lot of attention on me one day, I just imagined that would be just a by product of the things I was working on going well. I didn’t think they would happen and grow gradually side by side of each other.

Q: Tell me a bit more about your writings and social media virality. When you do put out something that resonates with a large audience, why do you think that happens for you when there’s so many others pushing content that doesn’t see the light of day?

A: I mean, I’m a big believer in G-d so I see it all as a huge blessing. Ultimately I think as influencers and writers, it’s very easy to be influenced by what other people are putting out there. Which leads to many people saying what the next guy is saying because it’s so easy to. When we are doing our best work it’s usually when we are at a place where we are very grounded in who we are and we are simply expressing that. When we are just trying to push content for the sake of pushing content, it’s easy for everyone to sound the same. We break through the noise where our soul shines through.

Q: You have an app coming out that is in the A.I. space. What do you see as the future of A.I. and what it means for your industry?

Q: As an influencer with a massive audience, enlighten me about why you often are found posting quotes.

A: Words open up worlds for people. It’s just often times we are not so conscious about the words we are putting out there and we sometimes lose sight of its value by using a plethora of them. I find that choosing just a few simple words or sharing a few simple words for others to focus on, can really change people’s lives. I know when I come across one line that really changes my day for the better I really appreciate that it was put in front of me, and that’s what I’m trying to do for others.

Q: What can we look out to see from you in the near future?

A: Well the apps a big one. I’m also focusing more on developing video content for you guys watching me on social to see my face more. I’ve been making some music and I even invested in building an in house studio to have a space I can go to to express myself and make songs people will appreciate, G-d willing.

Very cool. Well I’m very much looking forward to all that and watching you to see where you’re going next. Thanks so much for sitting with me!

Moshe: Thanks so much for having me!