The 10 Most Weed-friendly Cities in California

Though it wasn’t the first state to legalize recreational cannabis, California has been the center of American cannabis culture since the 1960s. As such, the Golden State has plenty of places where pot is fully appreciated. On your next trip to the West Coast, you might plan a stop at one of the following weed-friendly cities, where dispensary doors are wide open and more than welcoming.

San Diego has many of the same laws as the rest of California, but the chill vibe of SoCal stoner culture makes consumption much more acceptable around the city. Technically, it is illegal to use cannabis products in public, but there are certain areas where stoners are well-known to linger. Belmont Park, Sunset Cliffs and Ocean Beach are three gorgeous locales where locals accept public weed consumption, even by tourists.

If San Diego is for surfers, San Bernardino has a reputation for its skate culture. Regardless, getting stoned remains a popular pastime. In fact, San Bernardino prides itself on having the most marijuana-related festivals and events per year, at which of-age adults can buy and consume cannabis freely, even in public spaces. Planning a trip to coincide with one of the more significant annual events, like the High Times Cannabis Cup, would take any weed vacation to the next level.

With two dispensaries for every 10,000 citizens, Palm Springs has some of the highest density of weed in California — thanks in no small part to its status as a luxury vacation destination. Today, Palm Springs welcomes tourists who want to relax in its sumptuous resorts and enjoy its gorgeous natural scenery, but the city is also happy to allow these visitors to partake in the occasional legal toke, too.

One of the most glamourous neighborhoods in the heart of Los Angeles, West Hollywood is home to the Sunset Strip, which even today is filled with some of the country’s best clubs and theaters. WeHo has also long been known as a bastion for LGBT culture in LA, and its accepting culture is perhaps why it is one of the weediest LA scenes. West Hollywood claims the first cannabis lounges in LA, where visitors and residents alike can peruse local cannabis offerings and smoke socially in safety. 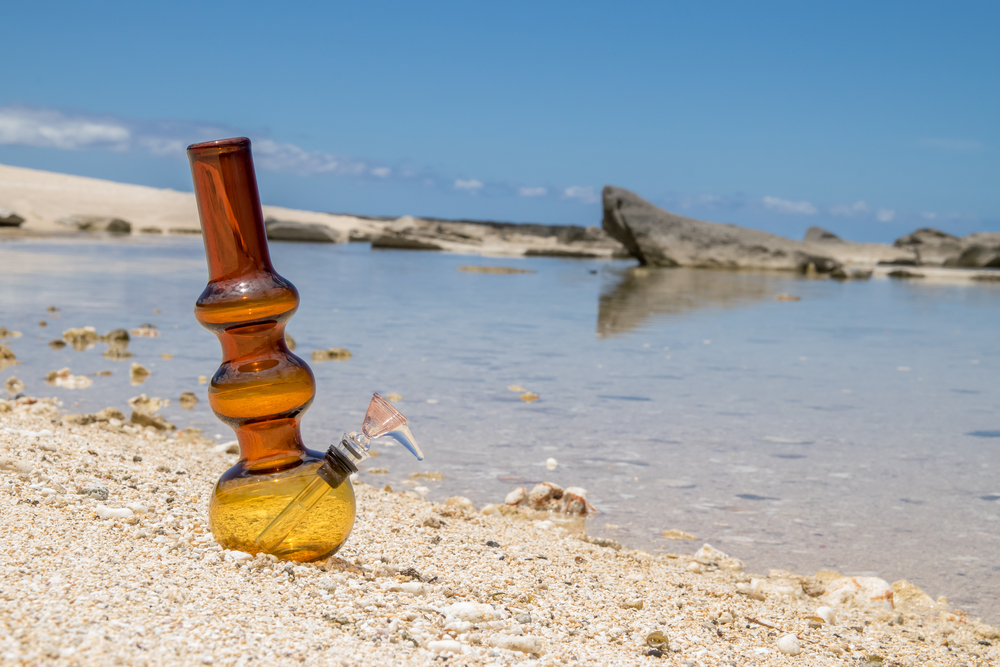 Santa Cruz feels like a close-knit community on the beach — a community that is so utterly relaxed thanks to its acceptance of cannabis that everyone is welcome to visit and enjoy. There is plenty for a stoned traveler to enjoy, from walking along the boardwalk and wharf to visiting the nearby aquarium. Like many NoCal cities, Santa Cruz has a favorable dispensary-to-population ratio, so visitors are never far from a cannabis shop where they can bolster their high.

The City by the Bay has enjoyed a reputation as a center for cannabis since the 1960s. In the 1990s, San Francisco created the first medical marijuana program, and today, consumption of cannabis is utterly commonplace. Though there are some unwritten rules restricting public use — you shouldn’t toke in indoor places or spaces packed with kids, for example — but authorities likely won’t bother you for partaking in areas like patio bars or secluded natural spots. Fortunately, there are a few cannabis lounges around the city for fully legal consumption in a social setting.

Located in the North Bay, Vallejo isn’t quite as glitzy or dazzling as other cities on this list. Though it has some tourist attractions, like Six Flags Discovery Bay, Vallejo is primarily a place where average, everyday Californians live and work. Even so, Vallejo boasts more than 20 pot shops within its municipal borders, marking it as one of the most weed-friendly cities in the state.

Stanislaus County isn’t known in California for its particularly progressive views. Mostly containing the Central Valley, which is typically conservative, Stanislaus is also home to Patterson, one of few towns in the area to permit cannabis sale and consumption. As such, Patterson receives a surprising amount of attention for its plentiful dispensaries, which serve not just the town’s 20 thousand or so residents but also those of neighboring cities — and anyone who visits during the annual Apricot Festival.

Way in California’s northern reaches, in the heart of legendary Humboldt County, Eureka is perhaps the world capital for cannabis cultivation. Though consuming weed is popular in Eureka, more people here tend to be obsessed with growing the good green stuff, thanks in large part to the regions near-perfect agricultural climate. There are a number of cannabis farm tours starting in Eureka that any stoner would be loath to miss.

You don’t want to travel all the way to California and end up in an area where cannabis consumption is frowned upon. Fortunately, there are more than a few different types of California cannabis vacation, so you can enjoy a bit of bud no matter how you prefer to get baked.

Signs It Is Time To Sell Your House

Best Malayalam 90’s Movie Songs – Which is Most Famous?

Jurllyshe: Shop Matching Set and Get Coupon Code in 2020

What Is The Secure Way to Use Of Credit Limit

How to Recover Lost Password from Encrypted Outlook PST Files

Question to Ask SEO Company Before You Hire Them

What Are HVAC Systems? – A Brief Guide

Want to Start Cryptocurrency Trading? – Tips for Getting Started

What Are the Major Health Benefits of CBD?

What are managed cloud services?