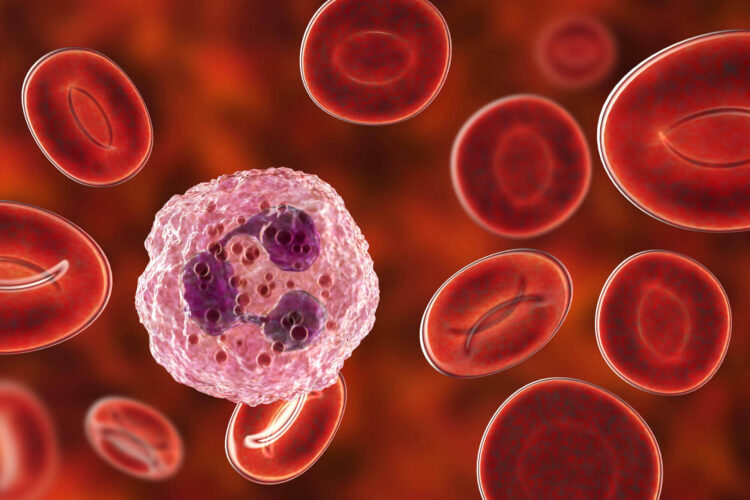 A randomized phase 2 study was conducted that randomly assigned 587 breast cancer patients to receive prophylactic naproxen, loratadine, or no prophylaxis before receiving pegfilgrastim for chemotherapy-induced neutropenia. [1] Those who received prophylactic naproxen were administered 500mg twice daily for 5 days in each chemotherapy cycle while those in the loratadine group were given 10mg once daily every morning for 5 days at the beginning of each cycle. Those in the pegfilgrastim group received 6mg of brand name pegfilgrastim, Neulasta, as a subcutaneous injection between 24 and 72 hours after the start of chemotherapy. The primary endpoint for the study was all-grade bone pain in cycle 1 from adverse effect reporting. Secondary endpoints included bone pain in cycles 2 through 4 and across all cycles. The cycles are based on cycles of chemotherapy that were associated with the use of pegfilgrastim. In cycle 1, all-grade bone pain was reported by 46.6% of patients in the no prophylaxis group (89/188), 40.3% (79/196) in the naproxen group, and 42.5% (85/200) in the loratadine group. All-grade bone pain was most frequent in cycle 1. The researchers used a reduction of bone pain by 10% in the groups treated with loratadine or naproxen vs the no prophylaxis group to mean statistically significant. In this study, the difference between the treatment groups and control groups was less than 10%, meaning that the difference was not statistically significant. The researchers do state however that the data collection of self-reported adverse effects of bone pain during cycles that can be 3 or 4 weeks apart may not be sensitive enough to detect a significant difference. I have included Table 3 from the study below for the reference of the severity of bone pain reported in each cycle throughout the groups 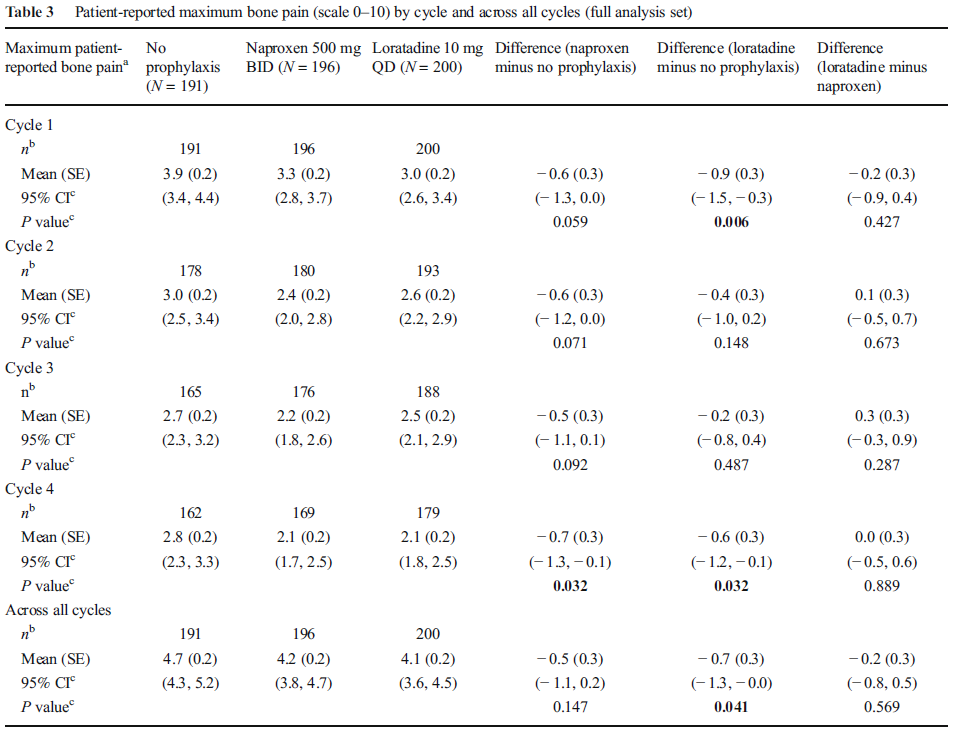 A second randomized phase 2 study evaluated the effect on loratadine for bone pain in patients using pegfilgrastim as well. [2] The researchers used two different treatment stages for the study. Oncology patients who received a dose of pegfilgrastim were placed in an observation stage while those of that group that developed significant back or leg bone pain were then enrolled in the treatment stage and randomized to receive either 10mg of loratadine daily for 7 days or placebo daily for 7 days. By the end of the study 213 patients were included in their analysis. Of the 213 patients, 46 were eventually placed into the treatment stage. Of the patients in the treatment arm, 77.3% observed clinical benefit with loratadine compared to 62.5% with placebo. However, with a p-value of 0.35, this is not statistically significant. In conclusion, the administration of prophylactic loratadine did not show to be clinically significant in decreasing severe bone pain in patients taking pegfilgrastim, however it is still commonly used in practice.