by Sebastian
in Edu
3 min read
0 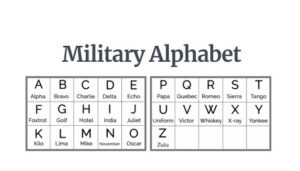 When watching a war movie and you hear the shouts of ‘bravo zulu’ and ‘tango yankee’ most of us civilians are left thinking ‘whiskey tango hotel?’ These codewords and their combinations come from the Military Alphabet which is used to ensure clear and accurate communication between service people as they work in high-pressure situations. Anyone who has had to spell out their name over a poor cell phone connection or had to communicate with someone whose accent is hard to understand can testify that not everyone’s ‘a’ sounds the same!

The Military Alphabet consists of 26 words each of which represents one of the letters of the alphabet. It is acrophonic, meaning that the name given to each letter begins with that letter. ‘Alpha’ and ‘bravo’, for instance, represent the letters A and B. In order to ensure that none of these acrophonic codewords can be confused with another, the words chosen to represent each of the letters are very different in their sounds. At its most basic level, this allows people to clearly spell out a word to someone who is not in a position to be able to hear them well.

Additionally, combinations of the codewords can be used to spell words such as, ‘Charlie alpha tango’ representing a cat. In addition, the codewords are often combined to form acronyms or abbreviations of common phrases such as ‘november golf’ (N.G. for no good, sometimes meaning fail). Some words are used to reference something in the immediate environment, such as ‘tango’, which in the military most often refers to a ‘target’ or an enemy.

Other industries that use the military alphabet

While this phonetic alphabet has come to be associated with the military because of its extensive use by the armed forces, its use is by no means limited to the military. In fact, in any industry that makes use of codes, demands clarity or operates in less than ideal situations for clear communication, the Military Alphabet is extremely useful.

Despite its name, the Military Alphabet was, in fact, first developed by the International Civilian Aviation Organisation (ICAO). This, however, is not entirely surprising as communications between aviators, ground control and aviation authorities can often be what causes or averts disaster.

Each aircraft is assigned a unique ‘Squawk Code’, technically an Aircraft Transponder Code, made up of Military Alphabet letters. This designation is used by air traffic control to refer to specific aircraft and distinguish between them.

Also, with their focus remaining on clarity, airports from which ‘Delta Airlines’ planes take off replace the ‘delta’ with ‘data’, ‘dixie’ or ‘david’.

Why learning it may help you

We often face situations where we have interactions where lack of clarity can be extremely frustrating. Next time you have to spell your email address over the phone, try using the Military Alphabet to make the interaction easier. And, of course, you could finally understand what’s going on in those war movies!

Therefore, you can see how implementing the Military Alphabet can be beneficial, regardless of the industry. It’s clear code words provide for accurate and easily understandable communication. This comes in handy in situations when the audio quality is poor, or an accent is difficult to understand. In the military, it saves lives and in the outside world, it improves efficiency and communication.

Get to Know Airtel Festive offers on Airtel Thanks App

Why Getting a Fake Id Is a Life’s’ Necessity

The Convenience of Shopping on Online Department Stores

What is iphlpsvc Is It Safe To Disable It?

What Does a Car Accident Lawyer Do and When Do I Need One?

How to Know When A House is Pest Infested.

PARENTAL CONTROLS – 10 TIPS FOR PARENTS TO DISCONNECT KIDS FROM THE DIGITAL WORLD!

How to Use Expansion Joints in the Correct manner?

How to Get Affordable Dental Implant Treatment

Is Spiderman PS4 the Best Ever Superhero Video Game!